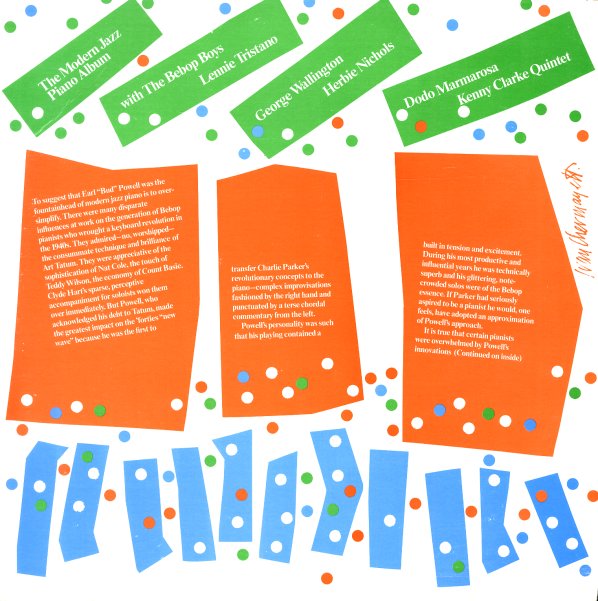 80s issue of some seminal recordings of some of the most influential, yet unde-documented jazz pianists of the bop and post bop eras. There's three tracks by the Bebop Boys, with Bud Powell, Kenny Dorham, Sonny Stitt, Al Hall and Kenny Clarke: "Bebop In Pastel", "Seven Up" and "Blues In Bebop". Following that there's 5 stellar tracks from Lennie Tristano's trio with Billy Bauer and John Levy, performing his cerebral and vastly influential music on two takes of "Supersonic", plus "On A Planet", "Air Pocket" and "Celestia" and fouor popping bop numbers from Herbie Nichols in a small group rolling through "'s Wonderful", "Nichols & Dimes", "Who's Blues" and "My Lady Gingersnap". There's also a batch of trio sides from Dodo Marmarosa and the under-recorded George Wallington, and a nice handful of bop numbers from the Kenny Clarke Quintet featuring Horace Silver. 27 tracks in all.  © 1996-2020, Dusty Groove, Inc.
(80s Italian pressing.)