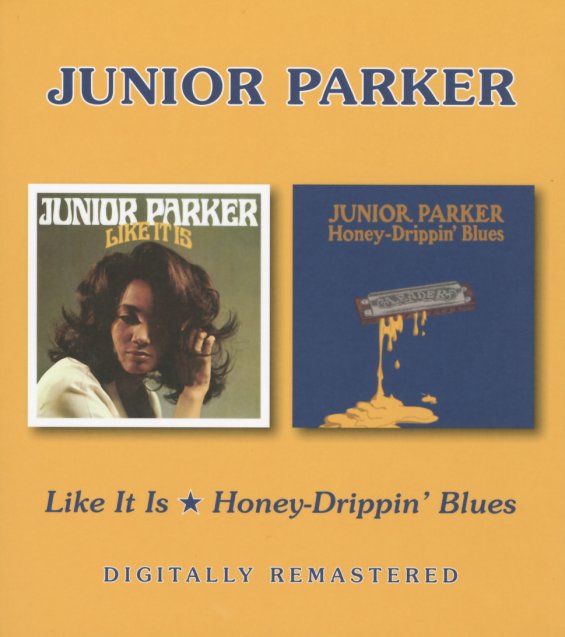 A pair of late 60s gems from the bluesy singer Junior Parker – back to back on a single CD! Like It Is features standout soul from the great Junior Parker – a singer who started out in blues, and already had a big legacy of music for Sun and Duke Records by the time of this Mercury set – but maybe sounding even more amazing here with some soul touches in the backings! The set was produced by Bobby Robinson, and arranged by Gene Bowlegs Miller – and has a Memphis recording pedigree that's a bit like the best way that Stax/Volt was mixing blues and soul in the late 60s! There's still some of the slower-burning Duke moments, but there's also some great sock-soul tracks too – on titles that include "Come Back Baby", "Just Like A Fish", "Country Girl", "Sometimes I Wonder", and "Cracked Up Over You". Honey Drippin Blues is killer work from Junior Parker – an artist who was already great in his early Duke Records years – but one who really seemed to take off even more as the 60s moved on! On records like this, Parker picks up a strong undercurrent of funky soul – a groove that's a perfect fit for Mercury's Blue Rock label – which often did a great job of merging the worlds of blues and soul – especially in the music of Junior Wells. Production has lots of nice Chicago soul touches, and at times Junior's vocals move into a territory that's almost a bit like the groove of Tyrone Davis at the time. Great stuff throughout – and titles include "I Got Money", "Lovin Man On Your Hands", "Easy Lovin", and "I'm So Satisfied".  © 1996-2021, Dusty Groove, Inc.