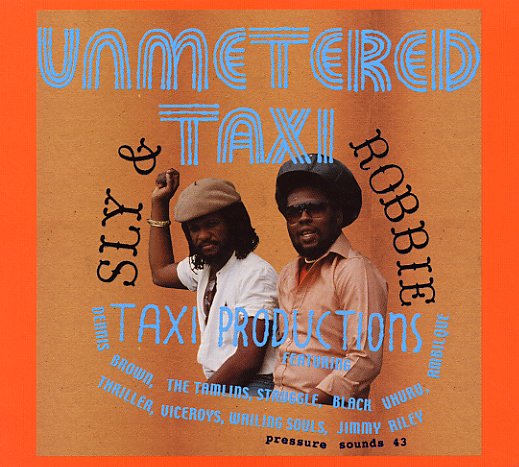 Earthshaking bass and percolating drums keep this superb set rockin' in fine style! Well known as the lynch pin to so many great rhythms cut from the 70s onward, Sly & Robbie's reputation as one of Jamaica's baddest rhythm sections precedes them. This compilation focuses on tracks produced by the Rhythm Twins, and issued on their Taxi label at the cusp of the 80s, one of numerous peaks in their lengthy career. 22 tracks in all, essential numbers issued here with their mighty instrumental versions: "Baltimore" and "Real Love" by The Tamlins, "Rocky Music" by Struggle, "Tickle Me" by Thrilla, "Shine Eye Gal" by Black Uhuru, "Old Broom" by the Wailing Souls, "Amblique" by Taxi featuring Brian and Tony Gold, "Love and Devotion" by Jimmy Riley, "Revolution (dub plate Version)" and "Revolution" by Dennis Brown and "Heart Made Of Stone" by The Viceroys plus "Baltimore Version", "Rocky Music dub", "Real Love Version", "Tickle Me Version", "Shine Eye Version", "Drunken Master (Love and Devotion Version)", "Revolution Version", "Unmetered Taxi", "Unmetered Taxi Version", "Old Broom Version" and "Heart Made Of Stone Version". As usual, excellent notes and nice package from Pressure Sounds make this set complete!  © 1996-2023, Dusty Groove, Inc.

Wild East
Moserobie (Sweden), 2022. New Copy
CD...$18.99 19.99
A record with a killer combination at the core – the tenor of Jonas Kullhammar and Hammond work of Steiner Nickelsen – both players who take this familiar pairing and really find a way to make something new! Yet that's also often the point of some of the best records on Kullhammar's ... CD