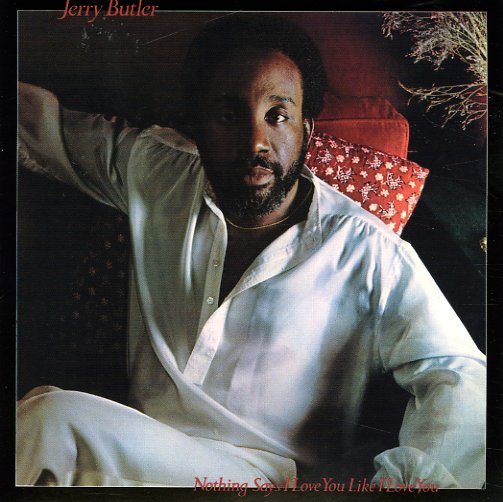 After working with Gamble & Huff on his big hits for Mercury in the late 60s, Jerry returned to work with the pair in the late 70s on their own Philly International label – stepping out with the same sweet groove that the Philly sound had brought to Lou Rawls, in a way that helped Butler really revive his sound at the time! The full rich approach really works magic with Butler's great vocals – in a way that showed that Jerry had never faltered during the 70s, but had just lost some of his steam through a bit of mis-handling by Motown on earlier albums. There's a proud, warm, all-adult sound to the album that we really love – heard to best effect on the anthemic "(I'm Just Thinking About) Cooling Out" and the great mellow groover "Let's Make Love" – but still pretty darn great on other tracks too! Titles include "Mighty Good People", "I'm Glad To Be Back", "Dream World", and "Are You Lonely Tonight".  © 1996-2023, Dusty Groove, Inc.
(Includes the printed inner sleeve. Cover has some edge wear.)

Power Of Love
Mercury, 1973. Near Mint-
LP...$13.99
An easy album to overlook, but not without some nice moments! Johnny Bristol produced the record, and he gives it a nice sweet 70s soul groove, similar to what he was using in his own work from the time. And typical of Jerry's albums from the early 70s, there's lots of nice original material, ... LP, Vinyl record album

Jerry Butler Sings Assorted Sounds – With The Aid Of Assorted Friends & Relatives
Mercury, 1971. Very Good+
LP...$9.99
One of the albums in which Jerry Butler showcases the talents of a new generation of young Chicago soul talents – including Terry Callier, Donny Hathaway, Chuck Jackson (from The Independents, not the New York soul star), and his brother Billy Butler. Billy Butler had already scored big with ... LP, Vinyl record album

Spice Of Life
Mercury, 1972. Very Good+ 2LP Gatefold
LP...$13.99
Perhaps the greatest record Jerry Butler made in the 70s, and a very tight bit of baroque Chicago soul with arrangements and production by Samuel F. Brown III. The tracks are a good mix of originals and covers, and they all show Jerry going way past his Gamble & Huff/Mercury years – into ... LP, Vinyl record album

Going East
Philadelphia International, Early 70s. Near Mint-
LP...$19.99
One of Billy Paul's greatest albums ever – or perhaps the greatest! The record is an amazing blend of soul, jazz, and a soaring sense of spiritualism that's not only rare for Billy Paul – but which makes the record sound different than any other Philly International LP from the time! ... LP, Vinyl record album

Message In The Music
Philadelphia International, 1976. Very Good
LP...$6.99
One of those records that really took Philly soul to the next level back in the 70s – a set that works amazing magic with the already-great harmonies of the O'Jays – pointing them even more strongly towards groove-heavy territory, while still keeping all the fragile, personal qualities ... LP, Vinyl record album