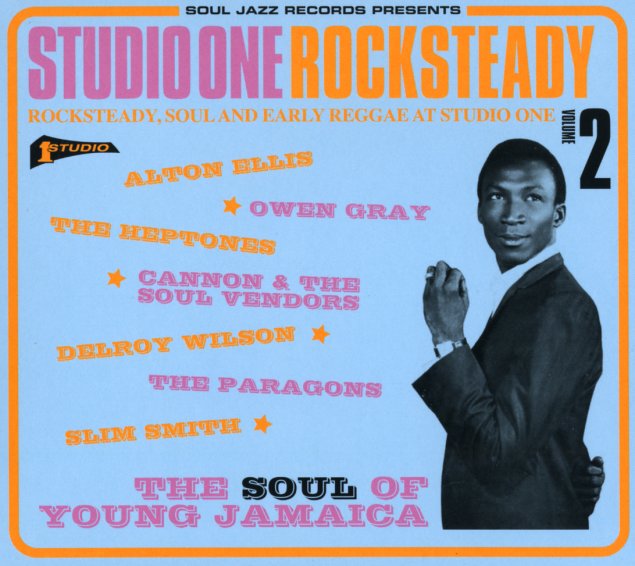 Soulful sounds from the legendary Studio One – music from a time when the Jamaican scene was taking some strong cues from the American soul scene of the 60s, but coming up with a unique groove of their own! As proof of that fact, some of the work here is based on original American soul tunes – but takes off in a very different way, especially in the rhythms – which follow on the earlier Jamaican modes in blue beat and ska, and created these gently grooving sounds which then allow for very different vocal styles too! Studio One really came into its own during these years – creating new soul stars in Jamaica through work like this – music that was a key precursor to the reggae explosion to come, but which is more than fantastic alone by itself. Titles include "Giddy Up" by The Actions, "Sitting In The Park" by Hortense Ellis, "Never Let Go" by Carlton & The Shoes, "Rub Up Push Up" by The Termites, "Give Me A Little Sign" by Owen Gray, "Breaking Up Is Hard To Do" by Alton & Hortense Ellis, "Strange Things" by John Holt, "Change Your Style" by The Paragons, "Trying Times" by Jerry Jones, "I Shall Be Released" by the Heptones, "Riding For A Fall" by Delroy Wilson, "Bad Treatment" by Cannon & The Soul Vendors, and "It Makes Me Feel" by Larry Marshall.  © 1996-2021, Dusty Groove, Inc.

Sugar Minott At Studio One
Soul Jazz (UK), Late 70s. New Copy 2LP
LP...$38.99 42.99
Seminal sounds from the mighty Sugar Minott – a singer who's sweet-voiced style was perfect for the changes going on at Studio One in the late 70s! Sugar grew up on the soulful styles of the rocksteady years – and here, as Studio One begins to step into some dancehall modes, his vocals ... LP, Vinyl record album