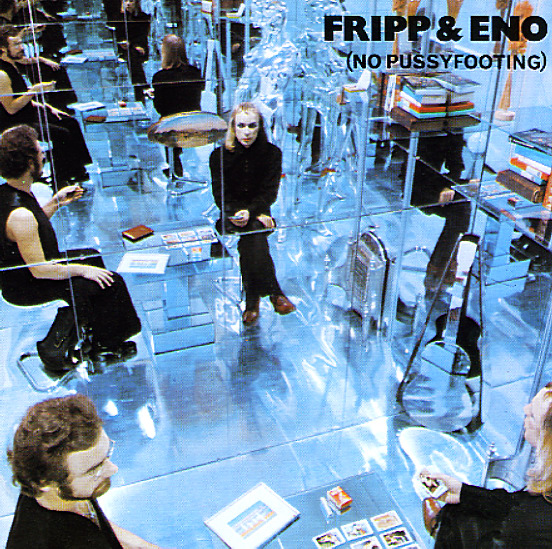 The first appearance of the Frippertronics delay line built by Fripp and Eno out of a couple of tape decks. Somehow even though this is nearly pure process music, it manages to sound far from dated, cliched or boring – ambient bliss meets only slightly noodly prog guitar in a hall of mirrors. 2 long tracks – "The Heaveanly Music Corporation" and "Swastika Girls" – both sidelong numbers coming in at around 20 minutes.  © 1996-2022, Dusty Groove, Inc.
(Black label Antilles pressing in a cover with CA address.)

End
Island, 1974. Near Mint-
LP...$34.99
One of Nico's darkest albums – and the kind of record we always suggest to those who doubt her genius! The incredibly spare set has Nico playing harmonium, which makes for a spooky off-kilter sound that really gives the record a somber approach – especially as the instrument sounds a ... LP, Vinyl record album

Traffic
Island/United Artists, 1968. Very Good+ Gatefold
LP...$16.99
The second album from Traffic, and a set that forever cemented their legacy in the annals of modern music – a set that has Dave Mason returning to the group after a brief hiatus, and maybe helping the quartet find a tighter, rootsier sound overall! The approach here is nicely mixed – ... LP, Vinyl record album

Mr Fantasy (red cover)
Island (UK), 1967. Very Good+ Gatefold
LP...$19.99
The incredible first album from Traffic – a record that was already way ahead of the pack, and would set the tone for so many other sounds and modes from others in years to come! At some level, the group were just coming off the big beat group years in the UK – that time of strong ... LP, Vinyl record album

Shoot Out At The Fantasy Factory
Island, 1973. Very Good+
LP...$9.99
Traffic get some help here from Muscle Shoals heavyweights Barry Beckett, Roger Hawkins, and Jimmy Johnson – a trio who help the group continue that richer, more expanded sound that was first unfurled on the group's Low Spark album! The sound is maybe a more focused attempt at territory from ... LP, Vinyl record album

Wide Awake In America EP
Island, 1985. Near Mint-
LP...$14.99
Titles include live recordings of "Bad" and "A Sort Of Homecoming", plus "The Three Sunrises" and "Love Comes Tumbling". LP, Vinyl record album

Living In Fear
Bronze/Island (UK), 1974. Very Good+
LP...$34.99 (LP...$29.99)
A really great record from Tempest – a group who have so many different things going on at once – guitars that would be right at home on a hard rock effort, rhythmic complexity that verges on prog, and a tunefulness that really sends the whole thing over the top with an unexpected ... LP, Vinyl record album