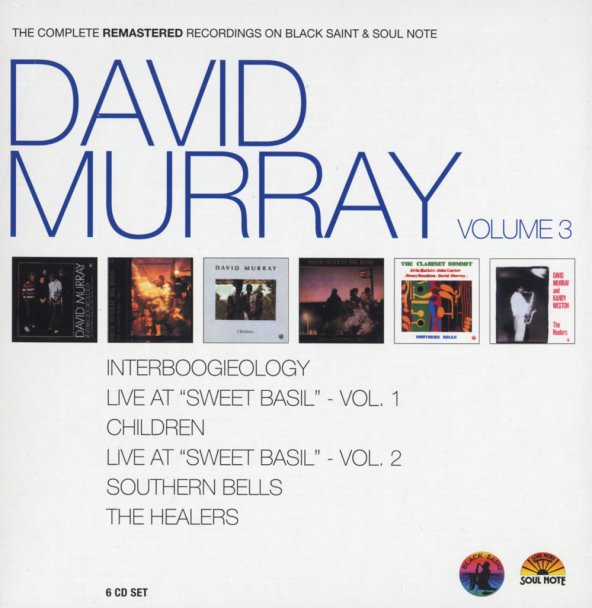 Music from a hugely productive period in the life of saxophonist David Murray – so much so that this is the third volume of his wonderful recordings for the Black Saint/Soul Note label – and there's no dip at all in the quality of the music! Murray was awash in new ideas at this time – and the label gave him freedom to try out so many different formats for his music – which allowed David to really deliver on the promise he first brought to jazz during the New York loft jazz years of the 70s. Albums include The Healers – a beautiful set of duets with pianist Randy Weston; Live At Sweet Basil Vols 1 & 2 – which features Murray's ultra-hip large ensemble, with Steve Coleman, Craig Harris, Olu Darla, Baikida Carroll, Butch Morris, and Fred Hopkins; Children – an unusual date with James Blood Ulmer on guitar and Don Pullen on piano; Interboogieology – which features Butch Morris on cornet and Johnny Dyani on bass; and the Southern Bell album by the Clarinet Summit – which features Murray, Alvin Batiste, John Carter, and Jimmy Hamilton. Each album comes packaged in a tiny LP-styled sleeve, too!  © 1996-2021, Dusty Groove, Inc.

Lucky Four
Enja/Ultra Vybe (Japan), 1988. New Copy
CD...$16.99
A gentler set than some of David Murray's other US dates from the time – but in a really great way that nicely gets at the more sensitive side of his work on tenor and bass clarinet! There's a bit of a hardbop groove to the album, but also a bit more freedom too – a style that never ... CD