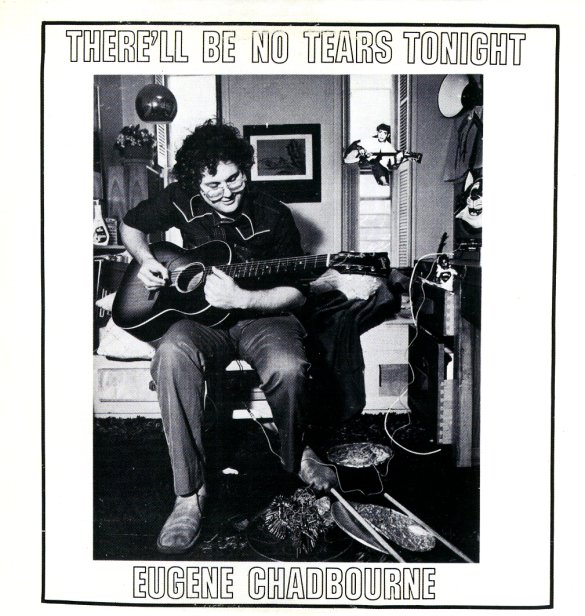 There'll Be No Tears Tonight

One of the most compelling albums ever recorded by guitarist Eugene Chadbourne – a set billed as "free improvised country and western bebop" – and which features Chadbourne serving up these wild variations on tunes by Carl Perkins, Roger Miller, David Allen Coe, Bobby Bare, Merle Haggard, and other country music legends! The album's much more Eugene than Nashville – although Chadbourne does sing lyrics on all of the tunes, but in a way that's very offbeat and hardly unlike the originals at all – as is his guitar work, which is acoustic and all twisted and turned up in all the offbeat phrasings you might expect! Much of the record is Chadbourne on vocals and electric dobro – but the set also features some drums by David Licht, saxes from John Zorn, and cello from Tom Cora. Titles include "The Last Word In Lonesome Is Me", "I'm The Only Hell My Mama Ever Raised", "Georgia In A Jug", "Motel Time Again", "Dang Me", "Window Shopping", "Jealous Loving Heart", "Mr Record Man", and "Swingin Doors".  © 1996-2020, Dusty Groove, Inc.
(Beautiful package – with a heavy Japanese-style paper sleeve!)

Tokyo Dreaming
Sony/We Want Sounds (UK), Early 80s. New Copy
CD...$18.99 (LP...$36.99)
A great dip into the wide world of Japanese pop in the early 80s – a set that does a nice job of bringing in some elements from the world of jazz, and showing just how much a range of electric modes flowed together in Tokyo at the time! Some of these artists were doing more offbeat work, ... CD