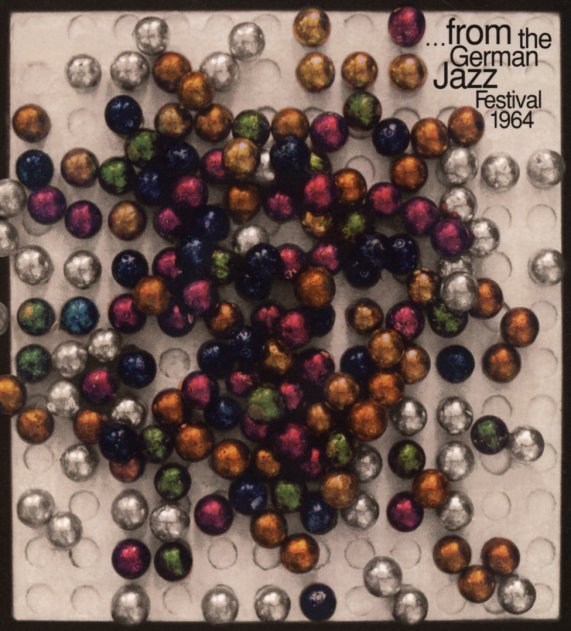 From The German Jazz Festival 1964

Incredible sounds from the German Jazz Festival of 1964 – a wonderful meeting of modern talents from all over the European continent at the time – including some great work from behind the Iron Curtain too! The album features a few tracks each by a number of different groups – all of them excellent, and the sorts of players who are really under-represented in terms of available recordings – which makes this selection of tracks completely essential! The set begins with "Sopranitis" and "Birmingham Post" – played by a very cool combo with Heinz Sauer on tenor and soprano sax, Joki Freund on the same two instruments, Emil Mangelsdorff on alto, and Gunther Kornberg on alto and baritone – a four-sax group that works with just bass and drums to give them a groove, with strong solos from all players. Next up is the fantastic Zagreb Jazz Quartet – with Bosko Petrovic on vibes – playing "In Walked Bud" and "Degressia" – plus a version of "Bluesette" with a guest appearance by Sven Asmussen. Tenor player Karl Drevo (Drewo) leads a quintet with trumpeter Maffy Falay and pianist Bora Rokovic – on a long reading of "Save Your Love For Me". The legendary quartet of saxophonist Klaus Doldinger is next – his great group with Ingfried Hoffmann on Hammond, Peter Trunk on bass, and Klaus Weiss on drums – with guest work by Rolf Kuhn on tenor and Inge Brandenberg on vocals – on the titles "Waltz Of The Jive Cats", "What's The Matter Daddy", and "Groovin In Berlin". Last up is one of our favorite groups of the time – the quintet of pianist Michael Naura, which also features Wolfgang Schluter on vibes and Peter Reinke on alto – on "Rainy Clouds" and "Rhythm A Ning".  © 1996-2022, Dusty Groove, Inc.