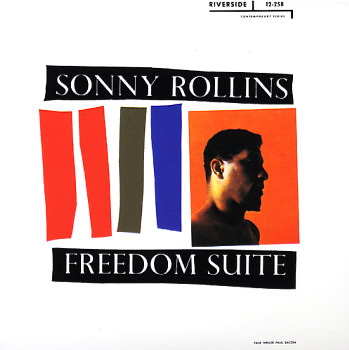 A crucially important record in Sonny Rollins' career – one that had him breaking out of the straight bop sound, and emerging as a major power on the tenor sax – one with limitless creative power! The set features Rollins working with only drum and bass accompaniment – played by Max Roach and Oscar Pettiford, respectively – and the lack of piano or other horns gives Rollins a free space in which to work his magic, doing so incredibly on the album's "Freedom Suite", an extended piece that runs for nearly 20 minutes, and which pushes all conceptions of the tenor's ability to solo freely on record. The other side of the record features shorter tracks – "Shadow Waltz", "Someday I'll Find You", and "Will You Still Be Mine?" – blown with no less creativity. Includes a bonus alternate take of "Till There Was You".  © 1996-2022, Dusty Groove, Inc.
(Out of print.)

Original Album Classics (Sonny Meets Hawk/Our Man In Jazz/What's New/Now's The Time/Standard Sonny Rollins) (5CD set)
Columbia, 1962/1963/1964. Used 5 CDs
CD...$14.99
3 years' of music spread out on 5 different CDs – some of the best albums recorded by Sonny Rollins in the 60s! The package is a great look at the key sides that Sonny recorded for RCA in the years right after his return to playing in the early 60s – and every record here is a treasure ... CD

Ain't But A Few Of Us Left
Pablo/OJC, 1982. Used
CD...$5.99
The title's a bit self-pitying, but the music certainly isn't – and even at this late point in his career, the sound of Milt Jackson is coming across loud and clear – possibly more so, because Milt's firmly shaken off the mellower modes of his years with the MJQ! The record has Jackson ... CD

Kenny Burrell & John Coltrane
Prestige/OJC/ZYX (Germany), 1958. Used
CD...$3.99
One of our favorite Kenny Burrell albums – and a record with a much deeper feel than lots of his other work! Kenny cut this album with John Coltrane in 1958 – and the session's a real standout in both of their careers at the time – Kenny's, for being a well-crafted, highly-focused ... CD

All Blues
Pablo/OJC, 1979. Used
CD...$8.99
A light and mellow set from Ray Bryant – cut very much in the mode of his best early Prestige/Moodsville sessions – with a trio that features Sam Jones on bass and Grady Tate on drums! The tunes are easy going, and touched with the bluesy inflections promised by the title – but ... CD