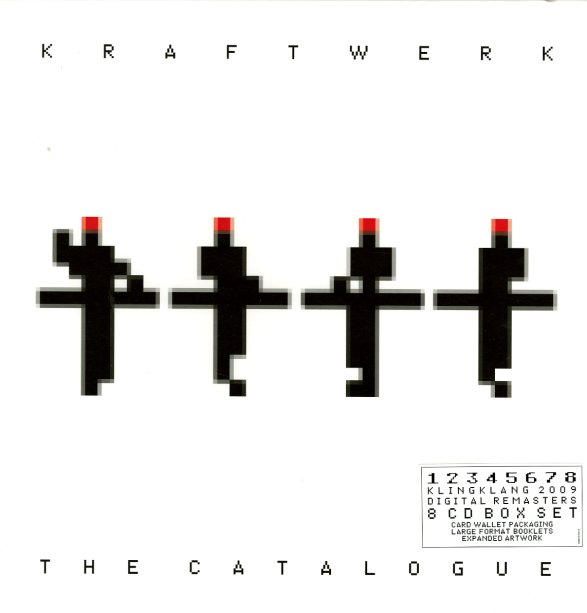 8CDs
Out Of Stock

Kraftwerk's Catalogue – the first ever complete remastering of the group's 8 album from 1974 to 2003 – Autobahn, Radio-Activity, Trans Europe Express, Man Machine, Computer World, Techno Pop, Mix, Tour De France in one incredible box set and featuring both restored and newly expanded artwork! Each album comes in a cardboard, LP style sleeve, created for this box set and unlike any previous CD versions, with their own inner sleeves – plus each album has it's own separate large, LP sided booklet – with the original and expanded artwork, that range from 12 to 20 pages, and come in this heavy duty cardboard portfolio! An visually amazing box set, for a series of classic LPs from one of the pivotal electronic and pop experimentalist combos of all time! Each album in its entirety, with 2009 remasters. Autobahn includes the title track, "Kometenmelodie" (1 & 2), "Mitternacht" and "Morgenspaziergan". Radio-Activity includes the title track, "Geiger Counter", "Radioland", "Airwaves" and more. Trans Europe Express includes the title track, "Europe Endless", "Hall Of Mirrors", "Metal On Metal" and more. Man Machine includes the title track, "The Robots", "The Model" and more. Computer World includes "Pocket Calculator", "Computer World" (1 & 2) and more. Techno Pop includes "Boing Boom Tschak", "Electric Cafe", "Sex Object" and more. The Mix includes, "Abzug", "Dentaku", "Home Computer" and more. Tour De France includes "Tour De France Etape" (1, 2 & 3), "Vitamin", "Chrono", "Titanium" and more.  © 1996-2021, Dusty Groove, Inc.
(Out of print, outer box has some light edgewear and Trans Europe Express is not included, priced accordingly.)

Rum Sodomy & The Lash
WEA (Germany), 1985. Used
CD...$2.99
Tremendous work from The Pogues – a group who may well have hit their height with this record! Producer Elvis Costello made it his mission to stay the hell out of the way and just capture the band in all their shambling, boozy glory, and that he does. Underneath his slurred vocals, Shane ... CD