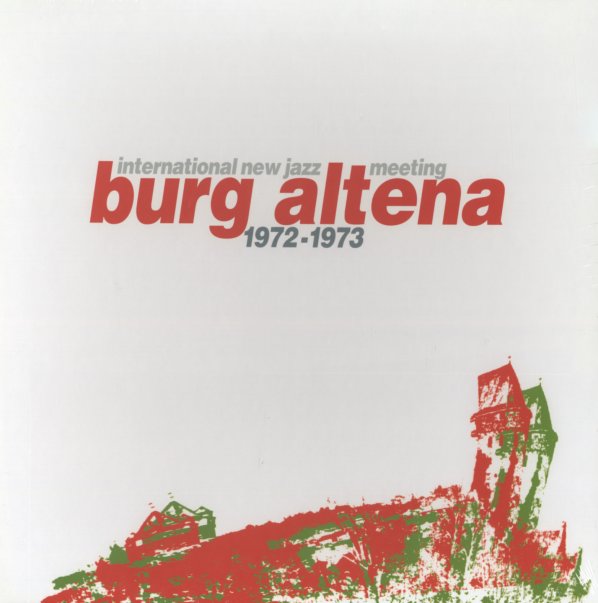 A double-whammy of a package – one that's like attending a totally hip festival of avant jazz, and finding a time machine to take you there in the process! This overstuffed box brings together recordings from two years' worth of the Burg Altena International New Jazz Meeting in Germany – 4CDs from 1972, and 4 from 1973 – packaged in a very cool box that features loads of photos, and reprints of pages from the programs to both festivals too! But the music here is what really matters – as the performances are all long, often freely improvised, and usually much more way-out than the material you'd hear from any of these players on record. Plus, the choice of musicians is quite unique – some familiar faces from the European underground, but also some real surprises, too – at a level that makes this collection a bit different than others of its nature. The 1972 discs features full sets by Chris McGregor's Brotherhood Of Breath, a quintet led by keyboardist Wolfgang Dauner with guitarist Attila Zoller, reedman Phil Woods European Rhythm Machine with Gordon Beck on electric piano, a duet between Jan Frederyk Dobrowolski on piano and Jacec Bednarek on bass, a quintet led by reedman/violinist Michal Urbaniak with Urszula Dudziak on voice and Adam Makowicz on electric piano, a quartet led by vibist/pianist Karl Berger with Ingrid Berger on voice and Peter Kowald on bass, and the Scandinavia New Jazz Group – with Bobo Stenson on electric piano, Lennart Aberg on tenor, Kjell Westling on soprano sax, Palle Danielsson on bass, and Bengt Berger on drums. 1973 is equally exciting – a performance of the fantastic Anima trio with Paul Fuchs on reeds, Limpe Fuchs on drums and voice, and Friedrich Gulda on acoustic and electric piano; a quintet led by trumpeter Terumasa Hino with Mikio Masuda on piano and Motohiko Hino on drums; the Theo Loevendie Consort, with Theo on alto and soprano, Hans Dulfer on tenor and flute, Martin Altena on bass, and Leo Cuypers on piano; Tune For Bassclarinets with the named instrument played by the quartet of Gunter Hampel, Willem Breuker, Michel Pilz, and Jef Sicard; and the Reform Art Unit, which includes Franz Kogelmann on trumpet, Fritz Novotny on reeds, Sepp Mitterbauer on pocket and regular trumpet, and Giselherr Smekal on organ and piano. Hours of music – and a wonderful package overall!  © 1996-2022, Dusty Groove, Inc.