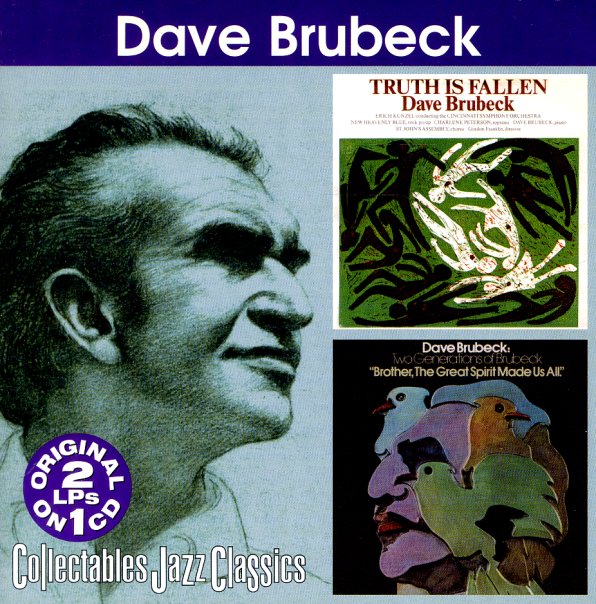 Truth Is Fallen/Two Generations Of Brubeck

Truth Is Fallen is a complicated orchestral work – with Brubeck's piano, and backing from both the Cincinnati Symphony and the rock group New Heavenly Blue! Two generations, four Brubecks – an all family affair from the early 70s! Patriarch Dave Brubeck leads the sons through some of Dave's fine original numbers, sitting at his acoustic piano with Darius Brubeck on electric piano, organ and more, Chris Brubeck on trombone and bass, and Danny Brubeck on drums – along with David Mason on guitar and some utility players. The effort is way better than you may be expecting, as the brood shows some truly surprising range on tracks that veer from wildly energetic and muscular, to slender and brooding, to tightly moving! An under-appreciated gem! Tracks include "Circadian Dysrhythmia", "Three To Get Ready", "Blue Rondo A La Turk", "Unsquare Dance" (with some lightly funky bass), "The Holy One", "Call Of The Wild", "Knives" and "Tin Sink".  © 1996-2021, Dusty Groove, Inc.
(Out of print.)

Bean Bags
Atlantic/Koch, 1958. Used
CD...$6.99 (LP...$24.99)
A wonderful little record – a real standout in both the careers of Milt Jackson and Coleman Hawkins! The album captures Hawk during his great later years – that time when his sound was even more soulful and inventive than ever – with lots of odd modern undercurrents that really ... CD

Mann & A Woman
Atlantic (Japan), 1966. Used
CD...$18.99
A really unique collaboration between fluteman Herbie Mann and soul singer Tamiko Jones – a vocalist who's always a really special talent, and who has an equally great ear for jazz as well! That style works perfectly here – as the vibe is somewhere between Herbie's Latin and Brazilian-s ... CD

George Wein's Newport All Stars
Atlantic/Collectables, 1969. Used
CD...$8.99
Although the name of George Wein is usually associated with some super un-hip trad jazz projects, this album's actually a pretty cool batch of grooves that matches Wein's older jazz tendencies with some newer styles of playing – and some good electric instrumentation on the best cuts. The ... CD