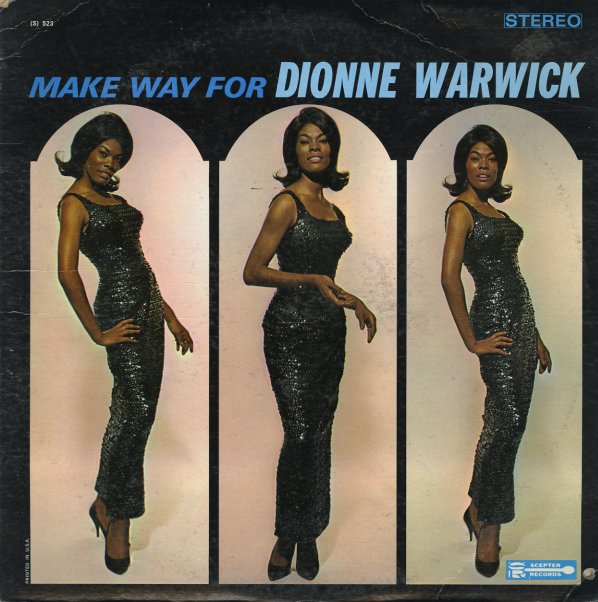 It's plenty easy to make way for Dionne Warwick with an album as great as this – the kind of set that spawned countless imitators in later years, but which still sounds better than most of the rest! Hearing the record is almost like going back to the headwaters of 60s pop – especially the more mature version that started to take hold later in the decade at labels like A&M or Capitol. But here, recording for Scepter, Dionne's already got it all in place – thanks in large part to a young Burt Bacharach, who's set things up here with poise and perfection that match the vocals perfectly! Titles include "Get Rid of Him", "A House Is Not A Home", "They Long To Be Close To You", "You'll Never Get To Heaven", "Walk On By", and "Make The Night A Little Longer".  © 1996-2022, Dusty Groove, Inc.
(Mono red label pressing, including Scepter inner sleeve. Cover has a hype sticker, light surface wear & aging.)

I'll Never Fall In Love Again
Scepter, 1969. Very Good+ Gatefold
LP...$3.99
Wonderfully mature work from Dionne Warwick – one of her last few albums for the Scepter label,with a sense of maturity, poise, and grace that tops even Dionne's earliest classics for the label. She's still working heavily here with Burt Bacharach – who produced and arranged most of ... LP, Vinyl record album

Soulful
Scepter, 1969. Very Good+
LP...$14.99
Dionne's certainly winning the "soulful" tag on this albums – working with Memphis producer Chips Moman, in a mode that's clearly designed to give her more credibility with the hipper soul scene at the end of the 60s! Burt Bacharach's still in the shadows, but Moman's the real ... LP, Vinyl record album

Anyone Who Had A Heart
Scepter, 1963. Very Good
LP...$6.99
Can 60s pop get any better than this? It's hard to think so – given the near-perfect sound of this album, and its unique blend of soul, vocal, and mainstream modes! The album's only the second in the career of Dionne Warwick, but she's already at the top of her game – singing with a ... LP, Vinyl record album

Track Of The Cat
Warner, 1975. Near Mint-
LP...$4.99
A wonderful album from Dionne Warwick – probably her greatest record after the early years! The session was recorded with production by Thom Bell at Sigma Sound in Philly – and the style is a sweet blend of Philly modes, from fragile ballads to midtempo groovers, all done in a warm and ... LP, Vinyl record album

Golden Hits Part 2
Scepter, 1969. Very Good+ Gatefold
LP...$4.99
This is an outstanding collection of Warwick's songs which are, of course, almost exclusively written by Bacharach and David. There are a total of 12 songs and even though they are Bacharach/David tunes which tons of others have recorded, she's the one who comes to mind when you hear them and her ... LP, Vinyl record album

Golden Hits Part 1
Scepter, Early 60s. Very Good+
LP...$4.99
Lovely early work from Dionne – one of the greatest voices to ever get the support of the great Burt Bacharach, the guiding hand on this tasty batch of early singles! We hardly need tell you about these tracks, because if you know Dionne at all – these are the songs you know! Titles ... LP, Vinyl record album

Shirelles Greatest Hits
Scepter, Mid 60s. Very Good+
LP...$14.99
A nice collection of tracks from this classic girl group, and one that has some nice lesser-known cuts mixed in with the chart busters. 15 tracks in all, including "Will You Love Me Tomorrow", "Stop The Music", "Dedicated To The One I Love", "Everybody Loves A ... LP, Vinyl record album