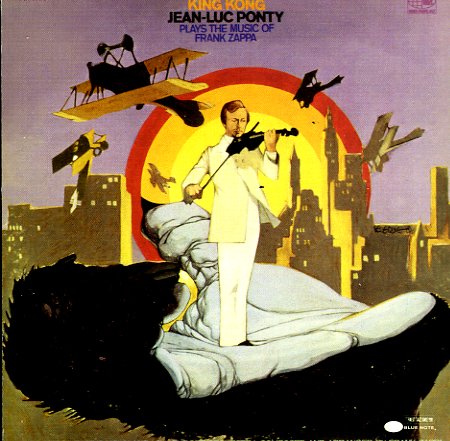 Trippy electric fusion from the west coast – a record that features Ponty, who was working with Zappa at the time, playing a set of electric jazz takes on Zappa tunes – with lots of added help from George Duke, who was also working with Zappa too! The set's almost a "birth of fusion" one – with Zappa arrangements that are clearly in a jazz-rock mode – and lots of electric bass, electric piano, and electric violin in the set. Tracks are long, and riff-heavy – and other players include Ernie Watts, Wilton Felder, Buell Neidlinger, and Ian Underwood. Titles include "America Drinks & Goes Home", "Music For Electric Violin & Low Budget Orchestra", "King Kong", and "Twenty Small Cigars".  © 1996-2022, Dusty Groove, Inc.
(Cover has some wear, partial splits in the spine and top seam, and a sticker remnant.)

Open Mind
Atlantic, 1984. Very Good+
LP...$3.99
Jean Luc Ponty is in very tight formation here – continuing that nice shift to sparer grooves he made at the start of the 80s – when the more cluttered fusion modes of the 70s seemed a bit outdated! Most of the music here comes from keyboards and violin – usually in ways that are ... LP, Vinyl record album

Mystical Adventures
Atlantic, 1982. Very Good+
LP...$4.99
Definitely some mystical adventures here from Jean-Luc Ponty – one of the few artists on the violin who can make it come up with sounds like this – weird cool and spacey elements that sound great next to the album's use of organ, keyboard, and Fender Rhodes! The album features two long ... LP, Vinyl record album

Latin Contrasts (aka Brazilliance Vol 3)
World Pacific, 1958. Very Good+
LP...$9.99
5 years after they made their first set of groundbreaking Braziliany jazz tracks together, Bud Shank and Laurindo Almeida went back into the studio to record another great batch for Pacific Jazz. That second set of sessions is captured here in its entirety, and it features Shank and Almeida ... LP, Vinyl record album

California Dreamin'
World Pacific, 1966. Very Good+
LP...$6.99
The alto of Bud Shank gets some fuller backings from the great Bob Florence – all in a mode that's as groovy as you might expect from the title – and which also features a bit of guest work from Chet Baker as well! The sound's nice and buoyant – swinging, but never too over the ... LP, Vinyl record album

Girl In Love
World Pacific, Late 60s. Near Mint-
LP...$4.99
Groovy arrangements by Oliver Nelson – with a vibe that's even hipper than some of Bud Shank's other albums from the time! Titles include "Girl In Love", "Don't Go Breaking My Heart", "Lady Jane", and "When A Man Loves A Woman". LP, Vinyl record album