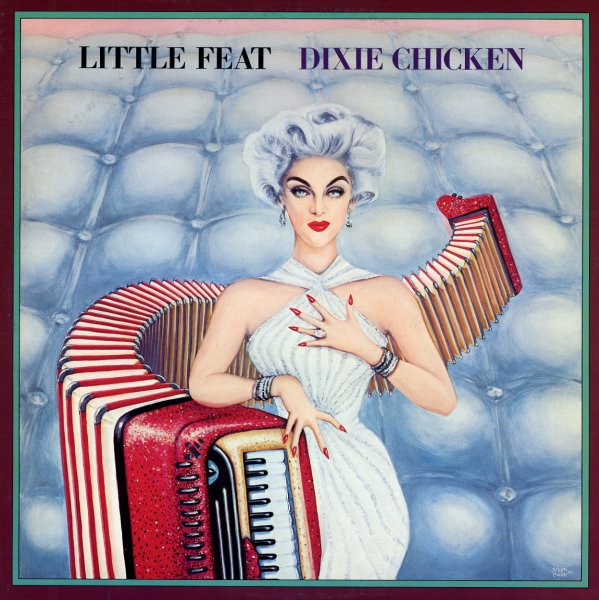 The third album from Little Feat – and one that brings a bit of Crescent City rock and soul into the mix – but it's still Little Feat, so it's got a restless creative energy that's beautifully tough to classify! There's quite a bit of soul influences in the mix – especially the tunes with the female chorus backing vocals. Not a Dixie rock cliche to be found anywhere on it, either! Includes "Dixie Chicken", "Two Trains", "Roll Um Easy", "Kiss It Off", "Fat Man In The Bathtub", "Fool Yourself" and more.  © 1996-2023, Dusty Groove, Inc.

Down On The Farm
Warner, 1979. Used
CD...$2.99 4.99
The last album of the 70s by Little Feat – and it's a strange one! On one hand, Little Feat is revisiting some of their country rock and New Orleans-inspired songs of years past – as well as the self-conciously oddball humor. But they're also working in a tighter, leaner and cleaner ... CD

Sailin Shoes
Warner, 1972. Used
CD...$3.99
The second album from Little Feat – and it's a great one! Loose roadhouse bluesy and country rock-styled songs – infused with their own weirdness! This is one of those great examples of a band that not only loved, but could play down home American music of many kinds – and add ... CD

Graceland (with bonus tracks)
Warner, 1986. Used
CD...$2.99
Paul Simon's mid 80s landmark – a record that brought together Simon's unique voice and pop folk songwriting skill with South African, Chicano, zydeco other global musical styles – held together by some of the best songs Simon ever put together! With lesser material, this would feel ... CD

Fandango (with bonus tracks)
Warner, 1975. Used
CD...$3.99 (LP...$11.99)
Texas boogie badassery from the great ZZ Top – the follow-up to the absolutely killer Tres Hombres! One side features the trio doing what it does best – slaying a live audience, this one at The Warehouse in New Orleans – and the other side features a handful of hard grooving ... CD