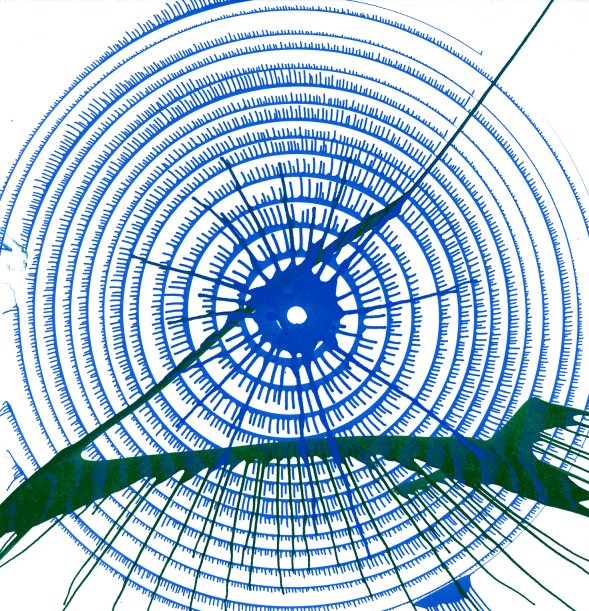 Sweet funky electronics from Franco Chiari – served up on a rare sound library session with an incredibly groovy feel! The keyboards range from electric piano to much more moogy modes – and are played with Chiari in ways that are almost a more electrified variation of the Italian soundtrack styles of the period – a bit like the approach that Piero Umiliani started using when he picked up electronics, but before he started going too far outside! There's definitely some funky gems here – the kind of cuts that would have strong appeal to any fan of 70s keyboard funk – and titles include "UFO Message", "Love Ride To Montecarlo", "A Taste Of Beat", "La Ranocchia Impazzita", "Bossanova Du Du Da", and "Rio Tu Ed Io".  © 1996-2023, Dusty Groove, Inc.
(Limited edition of 600 copies, and sleeve has a unique splash colored cover!)

Pop In – Devil's Train (with download)
Montparnasse 2000/Le Tres Jazz Club (France), 1976. New Copy (reissue)
LP...$29.99 32.99
One of the funkiest records of the French scene of the 70s – a now-legendary sound library album from Jacky Giordano – and one that's filled with amazing keyboards throughout! Jacky stars with grooves that are like some of the best Lalo Schfrin crime/cop modes of the early 70s – ... LP, Vinyl record album

Trip Around The World (180 gram yellow vinyl pressing)
Stella/Saar Milano (Italy), 1973. New Copy (reissue)
LP...$29.99 36.99
Beautiful sounds from one of the coolest Italian composers of all time – one of our go-to favorites for both soundtrack and sound library material! This set has Alessandro Alessandroni hitting some sweet 70s modes – funky at times, slinky and sexy at others – all with this ... LP, Vinyl record album

America Giovane 2 (180 gram pressing)
Leonardi/BTF (Italy), 1975. New Copy Gatefold (reissue)
LP...$28.99 34.99
America's never sounded better than in the hands of Italian sound library talent Daniela Casa – who does a great job here of serving up all these cool tracks that would have been right at home in a film set during the 70s! The music is a mix of themes that evoke different slices of the ... LP, Vinyl record album

Percussioni In Crescendo (180 gram pressing)
Leo/BTF (Italy), 1971. New Copy (reissue)
LP...$28.99 34.99
A great little album, and one that really lives up to the promise of its title – as most tracks have percussion building up with a rising sense of energy – only to be topped with a nice range of exotic instrumentation too! The approach is a blend of older exotica modes and hip 70s funk ... LP, Vinyl record album