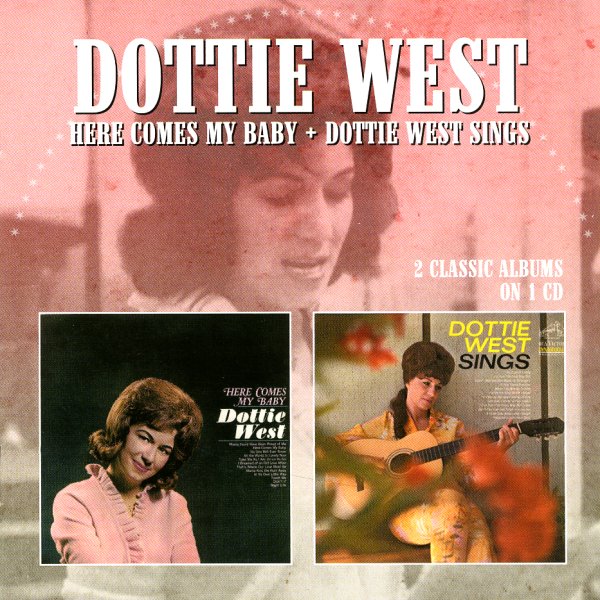 A pair of albums from Dottie West – back to back on a single CD! First up is Here Comes My Baby – a 60s classic from singer Dottie West, a country artist who almost seems a direct heir to Patsy Cline with her blue-tinged style on the set! Most tracks move in a slow-stepping pace – perfect Chet Atkins production, with heavenly arrangements from Anita Kerr – whose backing vocal group seems to be a fantastic fit for Dottie – really lifting her voice to the heavens on waves of blue! Titles include "Night Life", "Here Comes My Baby", "Mama Kiss The Hurt Away", "Take Me As I Am", "All The World Is Lonely Now", and "I Dreamed Of An Old Love Affair". Next up is Dottie West Sings – beautiful blue-tinged work from Dottie – one of the more weepy-eyed country singers of the 60s – and definitely one who's got a different vibe than some of the more badass female talents to emerge in country a few years later! The set's got the slow-loping groove you'd expect from RCA in the 60s – warm, airy production from Chet Atkins – nicely isolated piano or guitar parts, and a gentle flow to the arrangements that allow West to get melancholy on the lyrics, yet never sound too emotionally overindulgent. Titles include "It Just Takes Practice", "No Sign Of Living", "Happiness Lives Next Door", "Gettin Married Has Made Us Strangers", "You're The Only World I Know", and "When Two Worlds Collide".  © 1996-2022, Dusty Groove, Inc.