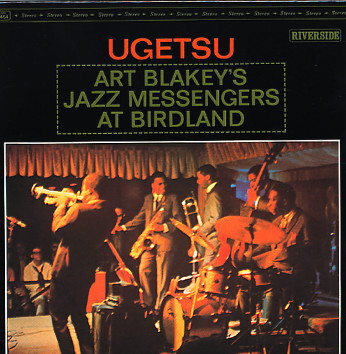 One of Art Blakey's best non-Blue Note albums of the 60s – a hard-wailing live set that fully exploits the best talents of the six-piece version of the Jazz Messengers! The group here is that tremendous sextet that featured Freddie Hubbard on trumpet, Curtis Fuller on trombone, Wayne Shorter on tenor, and Cedar Walton on piano – all working with Blakey to rework the earlier mode from his quintet years – in a way that actually allowed for a bit more lyricism and introspection! Titles include Cedar Walton's original "Ugetsu", Curtis Fuller's "Time Off", and Wayne Shorter's great "One By One", "Ping Pong", and "On the Ginza". CD also features 3 bonus tracks – "Eva", "The High Priest", and "The Theme".  © 1996-2022, Dusty Groove, Inc.
(Out of print.)

So Much Guitar!
Riverside/OJC, 1961. Used
CD...$6.99
So much guitar – but never too much, given that Wes was the real master of sound and space, even at this early point in his career! The album's one that tries to break Montgomery from some of his smaller combo albums for Riverside, and pair him with a few bigger names – Hank Jones on ... CD

Intimate Ellington
Pablo/OJC, Late 60s/Early 70s. Used
CD...$6.99
A really well-titled set – as it offers up some more intimate takes on the Duke Ellington sound of the cusp of the 70s – with some especially nice trio and solo numbers that are well worth the price of the whole collection! The album starts with the amazing "Moon Maiden" ... CD

Eric Dolphy At The Five Spot Vol 1
Prestige/OJC, 1961. Used
CD...$4.99 (CD...$4.99)
Searing live work from Eric Dolphy – part of a series of recordings that set a whole new standard for live jazz recording! The record features Dolphy going even farther out than on his studio sides from the time – as the record features very long tracks performed by a crack group that ... CD