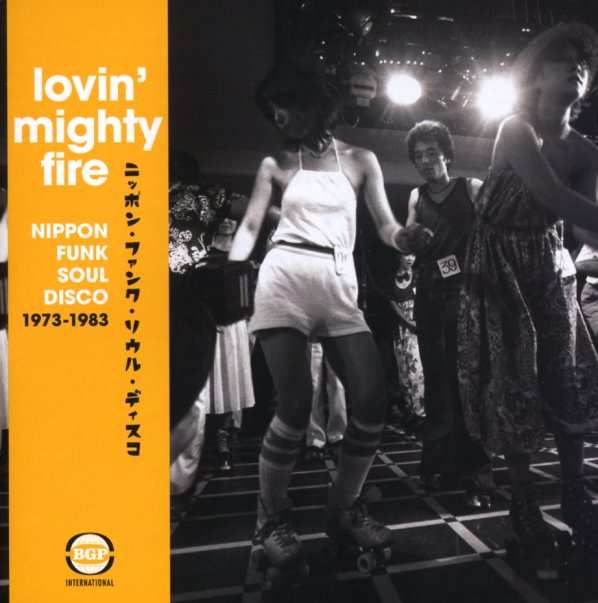 Also available
Various — Lovin Mighty Fire – Nippon Funk Soul Disco 1973 to 1983 ... CD 9.99
Disco grooves from a source you might not expect – the Japanese scene of the 70s, which was home to a surprisingly strong array of records that were perfect for the clubs! In retrospect, maybe the music's not such a surprise – given that 70s Japan was also a hotbed of electric fusion, and the kind of sharp instrumentation that provides the core to most of these tunes – wicked basslines, sweet keyboards, and funky drums that propel these tracks along in a wonderful way – even if you can't understand some of the Japanese lyrics over the top! In fact, many of these numbers are even more in the fusion or funk-inspired side of disco – less the crossover cuts with strings and big production, and more like the kind of American club tracks you might hear from Kudu Records or some of the other fusion labels. The package is proof that great sounds can be truly universal – and comes with detailed notes on the artists and scene at the time. Titles include "By By Session Band" by Lily, "Summer Champion" by Yuko Asano, "Dancin" by Junko Ohashi, "Rainbow Parade" by Masayoshi Takanaka, "Uragiri" by Mari Natuski, "Maboroshi No Hito" by Miyako Chaki, "Banana" by Kay Ishiguro, "Yashow Macashow" by Ebonee Webb, "Lovin Mighty Fire" by Nayoya Matsuko & Minako Yoshida, "Sentimental Hotel" by Rie Nkahara, and "Barato Yajuu" by Haruomi Hosono.  © 1996-2023, Dusty Groove, Inc.

Funky Trip – Detroit Funk From The Dave Hamilton Archive (180 gram clear vinyl pressing)
BGP (UK), Early 70s. New Copy
LP...$22.99 28.99
A killer little set that's as heavy as it sounds from the title – a wealth of rare material pulled from the studio of Detroit producer Dave Hamilton – a good deal of it never issued at the time! Hearing this set is like finding a pile of rare 45s stuffed in the back corner of a long-los ... LP, Vinyl record album

Living In The Streets Vol 3 – Busting Out Of The Ghetto
BGP (UK), Late 60s/Early 70s. New Copy 2LP
LP...$19.99 26.99 (CD...$9.99)
The funky third volume of the Living In The Streets series – and easily the best in this great series – a really hard and heavy batch of rare funk tunes that pushes past the cliches of the title to come up with an all-solid batch of tracks that's sure to please any fan of deep funk. ... LP, Vinyl record album