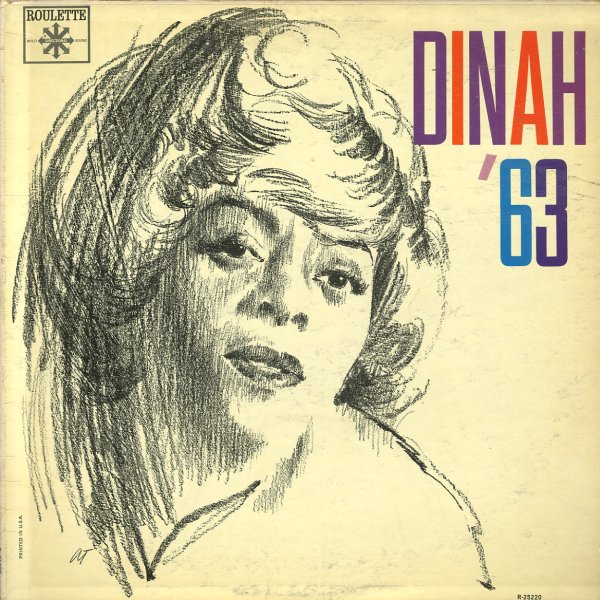 Dinah follows up her Dinah 62 set with an equally well-done set of tracks for 1963! The album's got that great, late Dinah Washington sound – that boozy style with heavy arrangements that she used often at Roulette, and which really seemed to help ease her vocals into a more modern setting. Backings are by Fred Norman, the album's got impeccable production from Henry Glover, and titles include "Make Someone Happy", "Take Me In Your Arms", "Why Was I Born", "In San Francisco", "Bill", and "There Must Be A Way".  © 1996-2021, Dusty Groove, Inc.
(Mono pink & orange label pressing.)

This Is My Story
Mercury, Late 50s/1961. Very Good- 2LP Gatefold
LP...$4.99
A cool compilation that features one album of new recordings of older Dinah Washington hits – done in 1961 with backings by Quincy Jones – and another record that features some of Dinah's best bits for Mercury from the late 50s and early 60s! LP, Vinyl record album

Dinah (Emarcy)
EmArcy, 1956. Very Good-
LP...$11.99
A great little small group session for Dinah Washington – more jazz-based than some of her earlier or later work, sung with a small combo that includes Wynton Kelly on piano, Georgie Auld on tenor, and Herb Geller on alto. Tracks include "Look To The Rainbow", "Goodbye", ... LP, Vinyl record album

In The Land Of Hi Fi
EmArcy, Mid 50s. Very Good
LP...$9.99
The Hi Fi in the title might imply that there's a bit more going on here arrangement-wise than on some of Dinah's other albums – but the scoring by Hal Mooney is still pretty straight, in a sophisticated jazzy mode that works best with the vocals, and which never overwhelms the singing for ... LP, Vinyl record album

Sing Along With Basie
Roulette, 1958. Near Mint-
LP...$2.99
One of the more obscure albums by Lambert, Hendricks, and Ross – a session of Basie tunes, performed with backing by the Count, plus additional lead vocals by Joe Williams, the voice most closely associated with the Basie group at the time! The style is similar to the trio's Sing A Song Of ... LP, Vinyl record album

In Love For The Very First Time – Introducing Wanda Stafford
Roulette, Early 60s. Very Good
LP...$24.99
A great debut from singer Wanda Stafford – and the kind of set that makes you think she's been recording albums like this for years! Wanda's got a hell of a voice, right from the start – a nice punch that really fits with the choice of material on the date – and with the lively ... LP, Vinyl record album

Jeri Southern Meets Johnny Smith
Roulette, 1958. Very Good+
LP...$19.99
Jeri Southern can be a hell of a jazz singer when she wants – and that was definitely the case on this gem of a record – a laidback small combo setting with excellent guitar accompaniment from Johnny Smith! Smith's trademark tones really color the record in a great way – ... LP, Vinyl record album

Free Spirits
Atlantic, 1962. Near Mint-
LP...$29.99
Amazing stuff – and one of Chris Connor's greatest records for Atlantic! There's a depth to this set that passes some of her others from the time – partially because the album features a very hip set of tunes, written by Ornette Coleman, Norman Mapp, John Lewis, Peggy Lee, and others ... LP, Vinyl record album

All Of Me
Bethlehem, 1956. Very Good+
LP...$39.99
Although the world always remembers Johnny Hartman best for his Impulse recordings with Coltrane, we've always dug some of his earlier stuff – like this album – because the sound's a bit rawer, and the style's got more of a kick! The magical Hartman voice is presented in two great ... LP, Vinyl record album