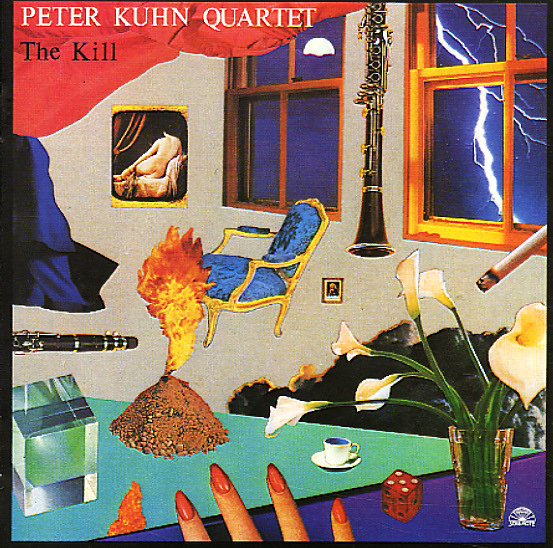 Modernist clarinet at its best – handled deftly by Peter Kuhn, in a range of modes that moves between hard-swinging jazz and much more spacious, sonic textures! Kuhn plays both standard and bass clarinet – using the latter with an especially great sound that reminds us of some of the better European reedmen on the improv scene in recent years – but cast here with a New York group that's got an almost loft jazz sensibility overall – a quartet with Wayne Horvitz on piano and keyboards, William Parker on bass, and Dennis Charles on drums. The best tracks build very slowly, with an almost spiritual feel – one that comes from the efforts of Parker and Charles on the bottom – and titles include "Skeeter", "You", "Being Human", and "The Kill".  © 1996-2021, Dusty Groove, Inc.

Bright Moments
Soul Note (Italy), 1987. Sealed
LP...$9.99
Proof that Max Roach was always experimenting with his music – even in the later years! The album's one of a few 80s efforts to feature Roach's Double Quartet – a group that takes his regular four-piece jazz group and augments it with a string quartet – all in a sound that's ... LP, Vinyl record album

Don't Lose Control
Soul Note (Italy), 1979. Very Good+
LP...$11.99
A trashy cover, but a great little record – one that's filled with wonderfully sensitive sounds from the team of George Adams and Don Pullen – working here in some really relaxed, soulful territory! The album's got a laidback feel that's a nice change from some of the more cerebral ... LP, Vinyl record album

West Coast Blues!
Jazzland, 1960. Near Mint-
LP...$59.99
One of our favorite albums ever from Harold Land, and a great set that has a hard soul jazz feel – despite the "west coast" in the title. Harold's playing with a great group that includes Barry Harris, Joe Gordon, and Sam Jones – as well as guitarist Wes Montgomery, who's ... LP, Vinyl record album