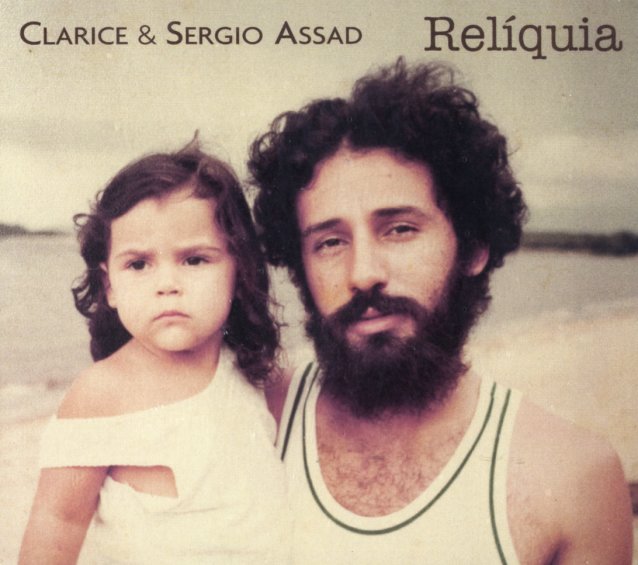 Really lovely sounds from the father/daughter team of Clarice and Sergio Assad -- a pair who would already be great as a musical duo, even without a family connection! Sergio plays acoustic guitar throughout -- with a fullness of sound, but also the lighter, lyrical sensibility that makes him a perfect match for Clarice's vocals -- which have that mix of jazz and more personal expression we love in our favorite Brazilian singers from the 70s -- like Tania Maria or Joyce. The songs are simple, and often poetic -- but never in a soppy way -- more like they're being written in air by guitar and voice, creating a marvelous portrait in sound. Titles include "Capoeira", "Cidade", "Sol De Clave", "Ventos", "The Last Song", "Angela", and "Song For My Father".  © 1996-2023, Dusty Groove, Inc.

Ayu
Mr Bongo (UK), 2016. New Copy
CD...$25.99 27.98
Very cool sounds from this unique Brazilian group – an ensemble whose music mostly comes from their voices and percussive sounds made on their bodies! The approach is surprisingly great – and maybe not nearly as squishy as you'd expect – as there's a clean, clear sound to the ... CD

Amor En Bossa Nova
Sonorama (Germany), 1963. New Copy
CD...$7.99 16.99
A rare bit of bossa nova from the early 60s – originally only issued in Argentina, but done with the warm grace and mellow groove of Brazil's best work at the time by Joao Gilberto or Carlos Lyra! Like both of those artists, Reginaldo Bessa's a poet in his approach to music – gently ... CD

Tema Do Boneco De Palha
Farroupilha/Sonorama (Germany), 1964. New Copy
CD...$7.99 16.99
Lovely bossa from a lesser-known singer – and a rare little gem that was originally issued on the tiny Farroupilha label in 1964! The album's got a really unique feel – one that's certainly classic bossa at its best, but which also somewhat different than usual too. Vera's vocals are ... CD

Brazil Now!
Sonorama (Germany), 1968. New Copy
CD...$8.99 19.99
A lost bit of dreamy bossa from the 60s – recorded in Brazil at the end of the decade, but unavailable to most of the world for years! The session's got a gently snapping, always jazzy approach that easily matches the best takes on the bossa coming out from Rio and LA at the time – and ... CD

Teach Me Tiger (Japanese paper sleeve edition)
Imperial/Universal (Japan), 1961. New Copy
CD...$17.99 21.99
Breathy brilliance from April Stevens – the sexy west coast singer who made some really wonderful records in the 50s! At some level, April was a bit like Julie London – in that she sang in a laidback, seductive tone that was quite risque at times – but she was also a bit more pop ... CD