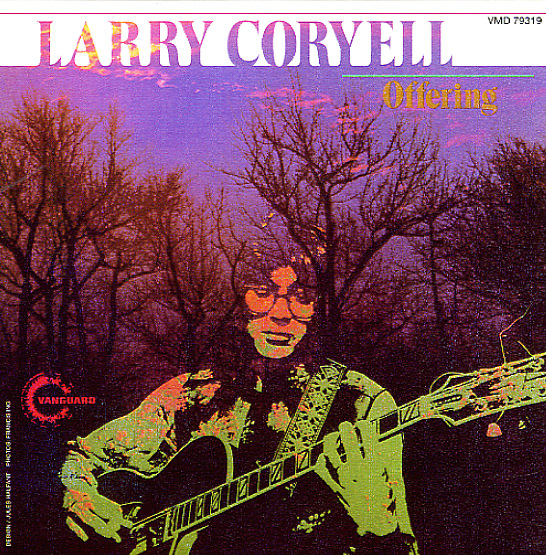 A fantastic record from guitarist Larry Coryell – one that maybe has him shedding some of the more rockish tendencies of his roots, while finding the way forward in a searing, searching style of funky jazz! There's almost a Flying Dutchman sort of righteousness to the record – as Larry mixes the ever-increasing sharpness of his guitar with great soprano sax from Steve Marcus – who himself may well be topping performances on albums under his own name. Bottom energy is driven strongly by Mervin Bronson on bass and Harry Wilkinson on drums – and the group also features lots of great keyboards from Mike Mandel – playing "electric piano with fuzz wah"! Titles include "Foreplay", "Ruminations", "Scotland 1", "Beggars' Chant", and "Offering".  © 1996-2021, Dusty Groove, Inc.
(Quadraphonic pressing.)

In Concert
Vanguard, 1975. Sealed
LP...$14.99
Beautiful live work from Oregon – a concert performance that somehow seems to provide an even more beautiful than usual setting for their special combination of talents! The group's flow is fantastic throughout – mixing the percussive elements of Collin Walcott on sitar, tablas, and ... LP, Vinyl record album

Vintage Stock
Motown, 1966. Very Good-
LP...$4.99
A very strong compilation of some of the best soul that Mary Wells recorded for Motown – and probably her only real album for the label. Although issued in 1966, the material hearkens from earlier days at Motown – and titles include "The One Who Really Loves You", "Two ... LP, Vinyl record album