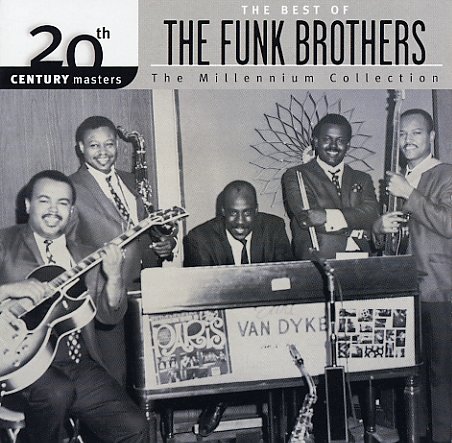 Motown legends finally get their due – in this first-ever collection of work by The Funk Brothers! The group were the backing band for most of the classic Motown recordings of the 60s – and labored for years with hardly any credit, until recently, when their achievements have been brought to light by the film Standing In The Shadows Of Motown, and a much-deserved Grammy award! And despite its cheap packaging, the collection's got plenty to offer any solid fan of Motown – 12 tracks that are pulled from sources that include tracks issued under the name of organist Earl Van Dyke, British singles, and even a previously unreleased mix! The tunes include a few originals, plus instrumental takes on Motown classics – with titles that include "Soul Stomp", "6 By 6", "Too Many Fish In The Sea", "All For You", "Come See About Me", "How Sweet It Is", "The Way You Do The Things You Do", "What's Going On", "Papa Was A Rolling Stone", and "Runaway Child Running Wild".  © 1996-2022, Dusty Groove, Inc.

Music Of My Mind (remastered)
Motown, 1972. New Copy
CD...$6.99 14.99 (CD...$2.99)
A pivotal album from Stevie Wonder – one of his first really heady records, and a tremendous little set from start to finish! The Wonder heard here is light years from the simple pop of the early days – really stretching out both as a songwriter and musician – coming up with a ... CD