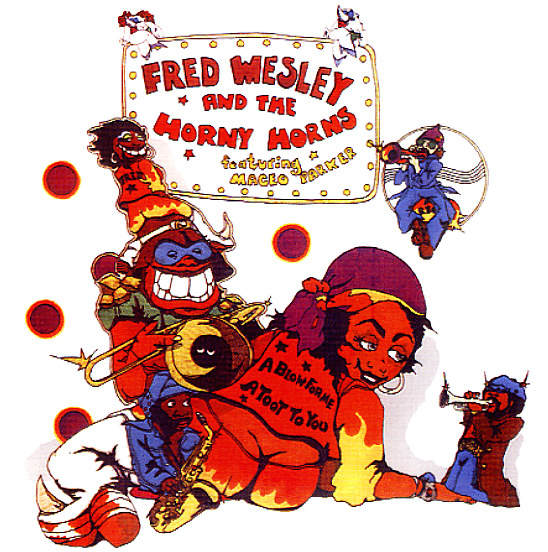 Blow For Me, A Toot For You (with bonus tracks)

After Fred Wesley and Maceo Parker came head to head with James Brown in the mid 70s, they broke off and formed the Horny Horns contingent – a tight funky backing section that's featured on a number of late 70s funk sessions, and which also recorded some extremely nice numbers on their own! This first album has the group working with George Clinton and Bootsy, who was a friend of Fred and Maceo from the old days – and who could really use the tight playing of some James Brown-trained musicians to smooth out their groove. This album was the group's first – and it's still their best – forging a massive new funk sound with the best elements of the old JBs fused through Clinton and Bootsy's P-Funk filter. Includes the monster funk cut "Fourplay" – a standout classic that features a funky break, hard solos, and all the other elements you'd need to make a great funky instrumental. Other tracks include "Between The Sheets", "Peace Fugue", and a version of "Up For The Down Stroke". Includes two bonus remix tracks – and an interview too!  © 1996-2021, Dusty Groove, Inc.
(Out of print.)

Imagination
Buddah/Right Stuff, 1973. Used
CD...$16.99
A pivotal album for Gladys Knight and group – as the record features their super-huge hit "The Midnight Train To Georgia", a landmark track that not only had a catchy pop hook, but which spoke volumes about African-American migration in the postwar years. The track's one of those ... CD