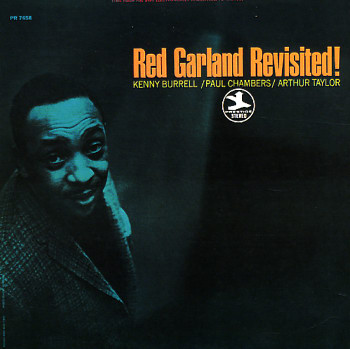 Red Garland revisited, and rediscovered – as the material here was recorded by Prestige in the late 50s, but not issued until a dozen years later – long after Garland's best success for the label! But the passage of time doesn't dim the genius here at all – and if anything, it's our guess that Prestige simply held back back in the day because there was already so much Garland on the market, they wanted to wait a bit, so as not to cloud up the waters. Their wait is our gain, as the record comes off with a freshness that's partially from its less iconic status in the Garland canon, but also from it's always-great sense of soulful and lyrical interplay on the keys! Also noteworthy is Kenny Burrell – who makes an appearance here on 2 tracks, augmenting the trio of Garland, Paul Chambers, and Art Taylor with his guitar. Titles include "Four", "Billy Boy", "Everybody's Somebody's Fool", "Walkin", and "Hey Now".  © 1996-2022, Dusty Groove, Inc.
(Out of print.)

Groovy
Prestige/OJC, 1956. Used
CD...$5.99 (CD...$5.99)
Long tracks and plenty of room to move around – a perfect setting for the classic sound of the Red Garland Trio on Prestige! Despite the title, the album's not so much groovy as it is lyrically beautiful and filled with sensitivity – a key bridge between piano players of the mainstream ... CD