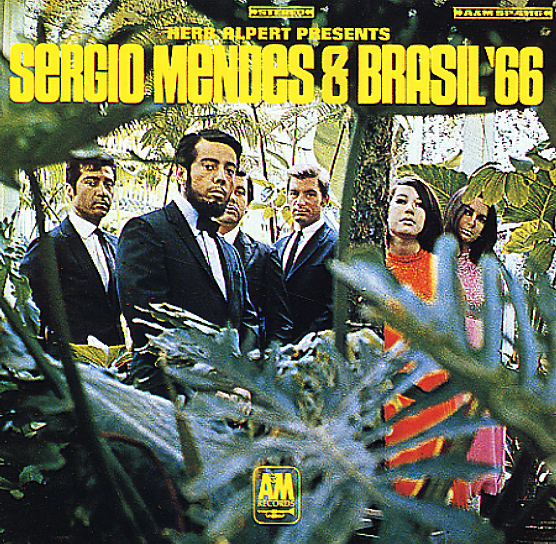 The start of a legend – and the very first album by Sergio Mendes' Brasil 66 group, proudly brought to the world through the godlike talents of a young Herb Alpert! Sergio was no stranger to the recording studio by the time of this set, but the record marked a real shift in his music – a change from the mostly-instrumental bossa modes he first forged back in Brazil, and a shift to warmer, sweeter pop with a nice sunny California finish – done through unique production techniques and the group's trademark two-lady lead vocals! The sound is tremendous, and is possibly heard in its purest form here – simple, focused, and given that near-perfect A&M sound through Herb's production skills. Titles include the classics "Daytripper", "Aqua De Beber", "O Pato", "Berimbau", "Mas Que Nada", and "The Joker".  © 1996-2022, Dusty Groove, Inc.
(2002 Japanese pressing with 24bit mastering.)

Equinox (LP sleeve edition)
A&M/Verve, 1967. Used
CD...$14.99
The second album by Sergio and crew – and a real push forward for the group! The basic format of two-female harmony leads is still in place – but for some reason, this album gives a bit more of a nod to Brazilian roots than before, and really spices things up with an even more ... CD

Look Around
A&M, 1967. Used
CD...$9.99 (LP...$16.99)
Dreamy bossa pop from the A&M studios of the 60s – the Brasil 66 sound at its best! The style here is a perfect blend of real Brazilian influences and some of the hipper styles bubbling in the LA studio scene of the time – all locked together perfectly by Sergio Mendes, in the twin- ... CD

Primal Roots
A&M (Japan), 1972. Used
CD...$26.99 (LP...$7.99)
A really unique little album from Sergio Mendes and Brasil 77 – one that's in a much more rootsy style than any of his other work! The "primal roots" here are taken seriously, and like some of his other contemporaries in Brazilian music, Sergio's looking back a bit, and towards a ... CD

Terra Brasilis
Warner, 1980. Used
CD...$3.99
Pretty great sounds from the legendary Antonio Carlos Jobim – an album cut a bit later than his bossa years, but with a darkly sophisticated sound that's pretty darn compelling! The album features larger orchestrations by Claus Ogerman, and in a way, it's similar to the Jobim album on Decca ... CD

Symphonic Jobim (aka Jobim Sinfonico)
Adventure Music, 2002. Used 2 CDs
CD...$9.99
A beautiful set of symphonic tracks based around the work of Antonio Carlos Jobim – work that stretches back to the 50s, up through 60s bossa nova, and even includes some of Jobim's more complicated orchestrations from the 70s! The music is done in the arch-baroque style of other titles on ... CD