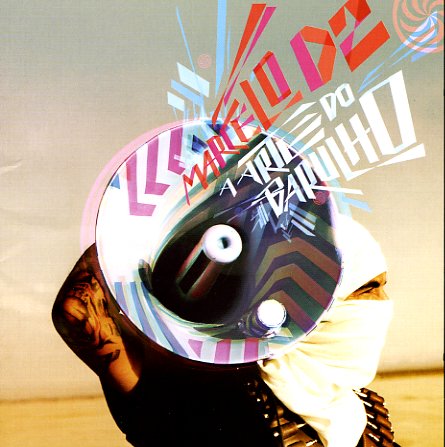 A Arte Do Barulho

Marcelo D2's still looking for the perfect beat, but this time around he's got some great help in his search – a list of heavy duty guests that includes Seu Jorge, Miriam Aydar, Medaphor, Roberto Sa, and Marcos Valle – each of whom get a chance to add strongly to a track on the album! As before, the style's a Brazilian variant of hip hop – heavy beats on the bottom, crisp production throughout, and a fair bit of Portuguese rhymes on the top inflected in ways that are quite different than those on American hip hop. There's a fair bit of warm Brazilian elements in the mix too – percussion and melodies you'd never here up here on a record like this – and although lots have copied Marcelo's approach in recent years, he's still one of the best! Other guests include Thama De Frietas, Stephan Peixoto, and Cabeza De Panda – and titles include "Desabato", "A Arte Do Barulho", "Ela Disse", "Kush", "Meu Tambor", "Minha Missao", "Fala Serio", "Pode Acreditar", "Ativadade Na Laje", and "Afropunk No Valle Do Rap".  © 1996-2021, Dusty Groove, Inc.
(Includes slipcase.)

Toni Tornado
EMI (Brazil), 1972. Used
CD...$34.99
An early 70s gem from Brazilian singer Toni Tornado – one of that country's greatest soul singers of the time, and an artist with a real talent for putting over a groove! The tunes on the set are a mad mix of heavy funk, deep soul, and larger arrangements – making the whole thing sound ... CD

Dans Mon Ile (Japanese pressing)
EMI (Japan), 2003. Used
CD...$24.99
Could bossa nova get any lovelier than this? Lisa Ono sings a host of French tunes and gives them a bossa twist – gently folding Rio into Paris with that wonderful voice of hers, and coming up with one of the best bossa crossover albums we've ever heard! The album features tunes by Michel ... CD