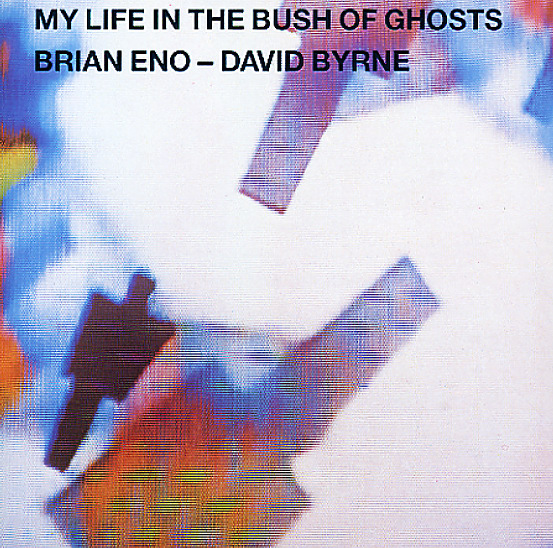 A groundbreaking collaboration between Brian Eno & David Byrne – recorded with a spare, stripped down love of electronics and found sound samples – in a mode that would have a huge influence on countless records to come! Part of the set resonates with the quirky grooves found in Byrne's early Talking Heads records – but the overall sound is much more stark than that work, and is characterized by key found vocals and odd ethnic bits that really set the tone for each new tune. Eno's influence is felt strongly in the simplicity of the tracks, and in the darkly resonant production modes – that classic Eno touch used here before it became a bit too trademark, in a way that could still make a record like this sound great, even when coming from major label sources! A key force in shaping countless genres to come in the next 25 years – with great tracks that include "America Is Waiting", 'Regiment", "The Jezebel Spirit", "Qu'ran", "Moonlight In Glory", "A Secret Life", "Come With Us", and "Mountain Of Needles".  © 1996-2022, Dusty Groove, Inc.
(Original pressing with Sterling stamp, including "Qu'Ran". A great copy.)

Remain In Light
Sire, 1980. Very Good-
LP...$24.99 (LP...$25.99)
Some of the most compelling grooves the Talking Heads ever recorded – a set that sparkles with imaginative touches, and railroads forward on a wave of complicated rhythms! The sound is brilliant throughout – a genre-less approach that sheds the group's earlier art nerd aesthetic for ... LP, Vinyl record album

Rocket To Russia
Sire, 1977. Near Mint-
LP...$49.99
Alright, let's get this straight right now – the songs don't sound the same, they ARE the same and that's why we love them! If you found a way to concentrate 30 years of the best rock & roll into two and a half minutes of beautiful primal energy that still managed to qualify as ear candy ... LP, Vinyl record album

Birds
Sire, 1975. Very Good+
LP...$7.99
A definite jazz/rock vibe here – not that far from Focus, especially since these guys come from the same Dutch scene! Instrumentation includes plenty of keyboards, plus drums and guitars – and cuts have some vocals, but secondary to the instruments. Titles include "Bourree", ... LP, Vinyl record album

More Songs About Buildings & Food
Sire, 1978. Near Mint-
LP...$34.99 (LP...$24.99)
Early genius from the Talking Heads – a set that's got a much sparer sound than most of their later work, and a surprisingly groovy feel overall! The starkness of the group's debut is still very much in place – lots of tight interplay between bass and guitar – but the rhythms are ... LP, Vinyl record album

Talking Heads 77
Sire, 1977. Near Mint-
LP...$49.99 (LP...$24.99)
The mindblowing first album by The Talking Heads – a bold statement by a very young band who'd go on to shape the sounds of the left field for generations to come! The sound is spare and very focused – maybe the first layer that David Byrne would then build up when adding more ... LP, Vinyl record album

Fear Of Music
Sire, 1979. Near Mint- Gatefold
LP...$49.99 (CD...$18.99)
A really tremendous album from The Talking Heads – and a set that moves far past their already-great early records, to really show a rhythmic complexity we never would have expected! Brian Eno is helping the group in the studio again here, and the record really shows both David Byrne and Eno' ... LP, Vinyl record album