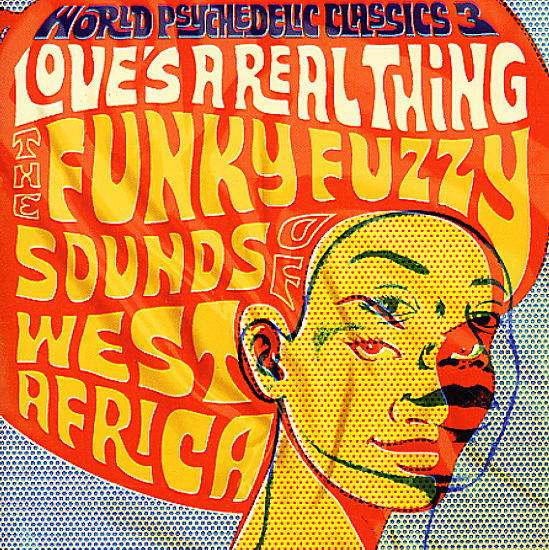 Also available
Various — World Psychedelic Classics 3 – Love's A Real Thing – The Funky Fuzzy Sounds Of West Africa (with download) ... LP 26.99
A really mind-bending collection of African grooves – one that digs deep into the West African scene of the early 70s – and comes up with a massive batch of tunes that really opens up our understanding of the music! The sound here isn't just 70s Afro Funk – as the tunes include a range of tripped-out styles that make the best use of electric instrumentation, psychedelic production, and important influences from American soul artists at the time. There's some amazing guitar on some of the best tracks – ringing out with a sound that's chromatically complex while also being tripped-out and funky – in a way that complicates the rhythms without totally taking them apart. If you've dug the tunes on previous sets like Africa Funk or Ghana Soundz, this is one to take that sound to the next level – and really open up your ears! Titles include "Keleya" by Moussa Doumbia, "Love's A Real Thing" by The Super Eagles, "Minsato Le Mi Dyihome" by Orchestre Poly-Rhythmo De Cotonou Dahomey, "Porry" by Sorry Bamba, "Allah Wakbarr" by Ofo & The Black Company, "Sanjina" by Orchestre Regional De Kayes, "Ifa" by Tunji Oyelana & The Benders, and "Zinabu" by Bunzu Sounds.  © 1996-2023, Dusty Groove, Inc.

Song Of Soweto
IRC/Outernational (UK), 1974. Sealed
LP...$9.99
A song of Soweto, but served up here by a really unique South African group that also features key work by a number of American players too! The sound is mix of the loping rhythms of SA jazz and some of the bolder elements you'd hear in American funk of the period – but all mixed together ... LP, Vinyl record album

Glucklich IV – A Collection Of Brazilian Flavours From The Past & Present
Compost (Germany), 2000. Near Mint- 2LP
LP...$18.99
One of the best entries in this always-wonderful series! As with the earlier volumes, this one's an amazing transformation of Brazilian grooves into a hyper-modern European idiom – featuring core acoustic beats and riffs remade into lush jazzy grooves by some of the greatest producers ... LP, Vinyl record album