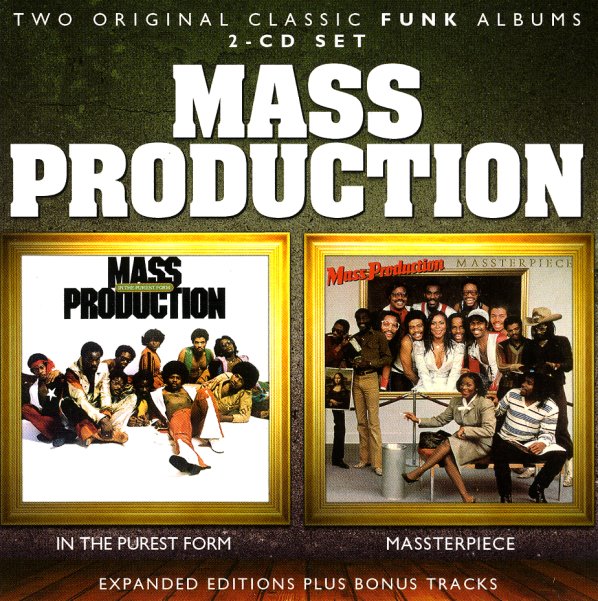 In The Purest Form/Massterpiece (with bonus tracks)

2 classics from funk legends Mass Production – back to back in a 2CD set, with 11 bonus tracks too! First up is In The Purest Form – a set that has Mass Production stepping forward as one of the best soul acts in the Cotillion Records roster at the end of the 70s – and maybe one of the hippest modern funk ensembles of the time! These guys have a way of making things sound nice and lean, despite a larger lineup – with a very strong focus on bassline currents, which seem to draw all the other elements into their wake in a mighty nice way! Yet the album's also not a slap-bass affair – as the deeper sounds are used with a nicely understated vibe, and even come through nicely on the mellower numbers – which might be our favorites. Tracks include "Our Thought (Purity)", "With Pleasure", "Next Year","Love You", "Firecracker", and "Can't You See I'm Fired Up". Also includes the great cut "Strollin" – which is a jazzy instrumental with trumpet and vibes, really working together in a tightly jamming groove! Massterpiece features more sweet grooves from Mass Production – a great little set that goes way beyond the usual ensemble funk and boogie at the start of the 80s! The set begins with a slightly mellower, more laidback feel than some of the other records by large funk acts – and that really sets the scene for the rest of the album – keeping a more well-rounded feel to the record, even when things get back into the more uptempo styles the group is known for! There's still plenty of bass in the mix, but the keyboards sparkle equally well – and the record's got some great instrumental moments too. Titles include "Enkuf", "Angel", "Forever", "Shante", "Gonna Make You Love Me", "Your Love", and "Nature Lover". Bonus tracks include 12" single versions of "Love You", "Firecracker", "Can't You See I'm Fired Up", and "Eyeballin" – and 7" mixes of "Shante", "Firecracker", "Love You", and "Angel".  © 1996-2022, Dusty Groove, Inc.