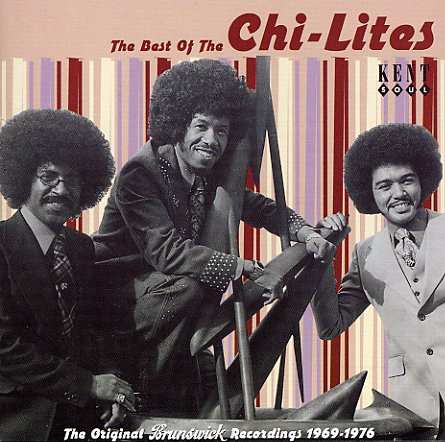 Best Of The Chi-Lites

Stunning work from one of the greatest vocal groups ever – the mighty mighty Chi-Lites! The group had an amazing run at Brunswick records during the late 60s and early 70s – recording single after single that not only helped redefine the sound of group soul for a new generation, but which also broke down previously held conceptions of sweet soul! Their harmonies were always perfect, the tunes usually had a sweet little groove at the bottom, and the topics of the tracks had a deeper approach to the material than some of the groups that came before them – really hitting a heartbreaking level on the best of their best love tunes, and sounding equally heartfelt even on the lesser-known numbers! This excellent 19 track set pushes past the simple hits, and also includes some of our favorite album tracks – making for a brilliantly-selected collection that also comes with some great notes! Titles include "I Like Your Loving", "Twenty Four Hours Of Sadness", "Give It Away", "You Don't Have To Go", "Too Good To Be Forgotten", "Homely Girl", "Letter To Myself", "We Need Order", "The Coldest Days Of My Life", "Give More Power To The People", "Toby", "There Will Never Be Any Peace", and "Let Me Be The Man My Daddy Was".  © 1996-2022, Dusty Groove, Inc.

I Like Your Lovin – Do You Like Mine
Brunswick/Solid (Japan), 1970. New Copy
CD...$16.99 19.99
A stone stellar batch of tracks from the mighty Chi-Lites – and a record that really shows why the group were such a standout at the time! There's a freshness here that few other groups could ever hope to match – lots of new material, penned by group leader Eugene Record – and ... CD

Lonely Man (with bonus track)
Brunswick/Solid (Japan), 1972. New Copy
CD...$16.99 19.99
One of the biggest records ever from The Chi-Lites – thanks to the "Oh Girl" title hit that's referenced on the cover! But apart from that ballad classic, the record's actually got a heck of a lot more to offer – some incredible harmony soul tracks that show that even during ... CD

Half A Love (with bonus tracks)
Brunswick/Solid (Japan), 1975. New Copy
CD...$16.99 18.99
Nothing half about The Chi-Lites at all – as the group were always tremendous during their famous run at Brunswick Records – able to come across perfectly on mellow ballads and more upbeat numbers! This set is a wonderful illustration of the really unique Chicago-based approach that ... CD