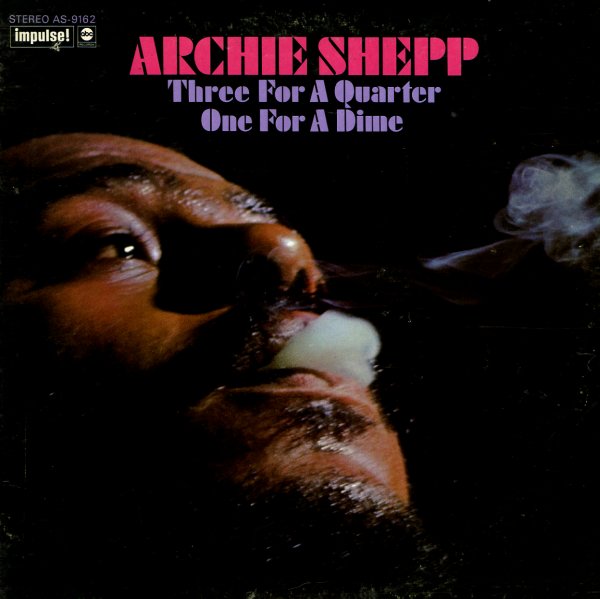 Three For A Quarter, One For A Dime

A classic bit of avant Shepp for Impulse – recorded in the mid 60s, at the same time as the Live in San Francisco album, with the same quintet, but not issued until years later! The album is in a different vein than the San Francisco album – one that shows the band stretching out more on two long cuts – "Three For A Quarter" and "One For A Dime" – that each cover a side apiece, with the Way Ahead feel that Shepp was searching for at the time!  © 1996-2020, Dusty Groove, Inc.
(Rainbow label stereo pressing. Cover has some marker, with two paint drips and scratches)

Montreux One
Arista Freedom, 1975. Near Mint-
LP...$9.99
Great live material from Shepp – not out or crazy, but also not spiritual or hippy dippy, either. The record's kind of a perfectly soulful straight ahead set – in a mode that hints at the traditional direction Shepp would take at the time, but with a lot more interesting moments. The ... LP, Vinyl record album

Montreux Two
Arista Freedom, 1975. Near Mint-
LP...$11.99
Some nicely outside work from Archie Shepp – maybe one of his last great recordings of this nature of the 70s! He's playing here with Charles Greenlee on trombone, Dave Burrell on piano, Cameron Brown on bass, and Beaver Harris on drums – and the tracks feature Shepp soloing with a lot ... LP, Vinyl record album

Sonny Rollins On Impulse!
Impulse, 1965. Very Good
LP...$16.99 (CD...$2.99, CD...$22.99)
A tremendous little album from Sonny Rollins – one of his most sharp-edged sessions of the mid 60s, and a bold departure from some of his previous work for RCA! The album has a crackling sense of energy that more than lives up to the exclamation point in the title – a starker quality ... LP, Vinyl record album