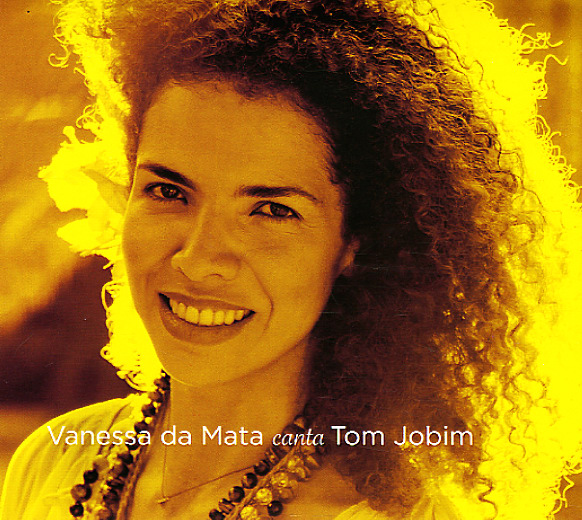 Wonderful stuff – a set that represents a real maturation for Vanessa Da Mata – a stronger link to Brazilian tradition than before, yet still with a vibe that hanks onto the contemporary energy that's always made us love her records! As the title indicates, the set's a batch of classic compositions by Antonio Carlos Jobim – sung by Da Mata in this gently flowing style that's mighty nice – and set to arrangements by Deodato that really have an old-school mode – but not some sort of sleepy retro-bossa, or bossa-remix – instead that kind of airy space that Deodato first helped pioneer back in the 60s, and which sparkles even more here from his own lead work on acoustic piano! The balance is great, and Vanessa really rises to the top in the setting – on titles that include "Fotografia", "Wave", "Correnteza", "Estrada Do Sol", "Sabia", "So Tinha De Ser Com Voce", "Chovendo Na Roseira", "Por Causa De Voce", and "So Danco Samba".  © 1996-2022, Dusty Groove, Inc.
(Out of print and still sealed.)

Obrigado Vinicius
Sony (Brazil), 2013. Used
CD...$12.99
A contemporary set, but one with a very classic bossa feel – maybe even more so than most other recent work from Toquinho! As you'd guess from the title, the album pays tribute to Toquinho's frequent musical partner of the 70s – poet and lyricist Vinicius De Moraes, the man whose words ... CD

Antonio Brasileiro Jobim
Sony (Japan), 1995. Used
CD...$19.99 (CD...$9.99)
Later work from bossa legend Antonio Carlos Jobim – and a set that shows just how creative his talents could grow over the years! Jobim was never stuck in the simple trappings of the generation from which he emerged, and could instead find ways to bring the airy brilliance of his style into ... CD

Horizontal/Vertical
Sony (Brazil), 2011. Used
CD...$16.99
Lo Borges looks surprisingly youthful in the artwork for this CD – and his music sounds the same – every bit as fresh and personal as when he first sprang onto the scene with Milton Nascimento at the start of the 70s! As with other recent efforts, the songwriting is superb – as ... CD

O Planeta Blue Na Estrada Do Sol
Sony (Brazil), 1991. Used
CD...$9.99
A pretty nice live set from Milton Nascimento – recorded in the early 90s, but done acoustically, in a way that really gets at the gently soulful nature of his work! Backing is by a small group that includes piano, sax, flute, bass, and percussion – and the resultant style is really ... CD

Gilberto's Samba
Sony (Brazil), 2014. Used
CD...$11.99
One of the best records we've heard from Gilberto Gil in many, many years – a stripped-down session that focuses on his voice and guitar work – in a style that takes us back to Gil's earliest days in music! The album feels like some lost session that Gilberto might have recorded in the ... CD