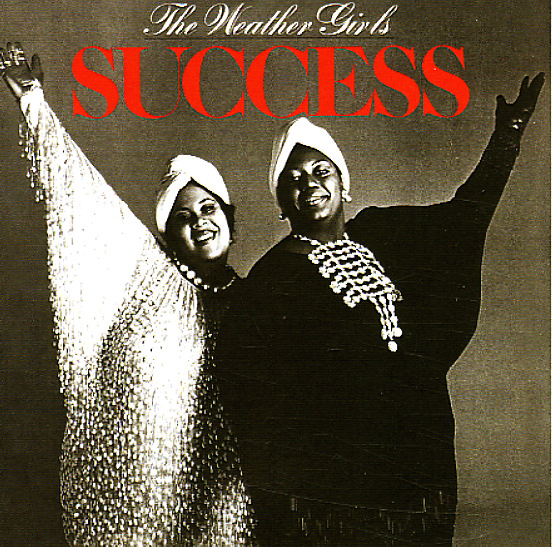 Also available
Weather Girls — Success (with bonus tracks) ... CD 12.99
Maybe the greatest moment ever from The Weather Girls – a long-running duo who started out as backing singers for Sylvester in the 70s, then recorded as Two Tons O Fun, and finally got the chance to cut this classic for a major label in the early 80s! Both Martha Wash and Izora Armstead are great singers – and work here with previous disco maestro Paul Jabara, who has a great way of shifting the groove to 80s club, while still allowing all the playful elements of the decade before! In a way, this was definitely one of those records that showed the world that in the right corners, disco wasn't dead – heard to best effect on the classic "It's Raining Men" – alongside other cuts that include "Success", "Hungry For Love", "Dear Santa", "Hope", and "I'm Gonna Wash That Man Right Out Of My Hair".  © 1996-2022, Dusty Groove, Inc.
(Includes the printed inner sleeve.)

That's The Way Of The World
Columbia, 1975. Good Gatefold
LP...$4.99 (CD...$6.99)
Amazing! Earth Wind & Fire's ultimate moment of the 70s – and a perfect blending of all their influences that stands as a lasting tribute to their super-huge effect on soul music! The record features all aspects of the band coming into perfect cohesion – bassy funk, mellow soul, ... LP, Vinyl record album

Soft & Beautiful (photo cover)
Columbia, Mid 60s. Near Mint-
LP...$8.99
The title's certainly right on this one, because the album is soft and beautiful – recorded by Aretha Franklin in a moody late nite mode that's similar to early 60s work by Sarah Vaughn or Dinah Washington on Roulette! Backings are by Belford Hendricks – relatively full, with strings ... LP, Vinyl record album

Kooper Session
Columbia, Early 60s. Very Good
LP...$14.99
Shuggie Otis' second appearance on record (the first was with Johnny Otis on the Cold Shot LP) – done in a studio blues jam headed by Al Kooper, who's more than willing to back off and let Shuggie get plenty of space to do his own thing! The record has Shuggie really going to town on a few ... LP, Vinyl record album

Gladys Knight
Columbia, 1979. Very Good
LP...$2.99
A really wonderful solo set by Gladys Knight – a record that has her stepping out strongly on her own, during a brief break from The Pips! The set's arranged by Gene Page – who mixes together strings and soul at a level that supports the classy style that Knight had forged at Buddah ... LP, Vinyl record album

Everybody's Talkin'
Atco, 1972. Near Mint-
LP...$14.99
King Curtis' last album of studio work for Atlantic – pulled from a number of sessions recorded in the year before his untimely early death! The sound here is tightened up a bit from King's grooves of the 60s – done with a style that still draws on the Atlantic soul sound that Curtis ... LP, Vinyl record album