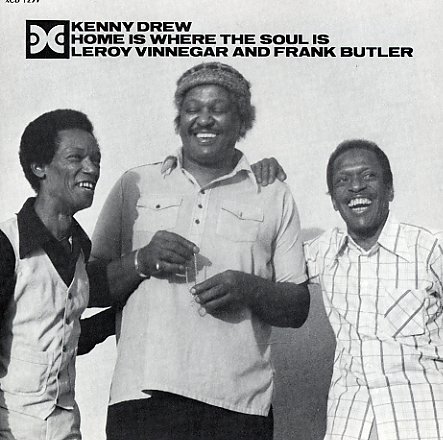 Home Is Where The Soul Is

Kenny Drew's looking a bit hipper than usual on the cover – and he's sounding a bit hipper, too – really stretching out in a way that's different from some of his other albums of the 70s! The set's an overlooked gem from Drew – recorded in the easygoing manner of the Xanadu label's 70s sessions, with soulful backing from Leroy Vinnegar on bass and Frank Butler on drums – an openly swinging, very soulful group that's a nice change from some of Drew's European ensembles. The title's an apt one, as the Kenny heard here is a bit more laidback and soulful than the Kenny of some of the many European sessions of the 70s – and even on familiar number, there's some great warm interplay between the trio – very much in the smiling spirit of the photo on the cover! Titles include "West Of Eden", "Three & Four Blues", "Ending", "Only You", and "Work Song".  © 1996-2021, Dusty Groove, Inc.
(Xanadu Master Edition.)

Solo/Duo – Niels-Henning Orsted Pedersen/Bo Stief
Storyville/Solid (Japan), 1966/1978/1983. Used
CD...$9.99
Kenny Drew's the star of the set on piano – playing solo here on a session from 1978, with a young bassist Niels Henning Orsted Pedersen in 1966, and an early 80s set of duets with bassist Bo Steif on the remainder of the tracks! The album does a nice job of blocking things out – so ... CD