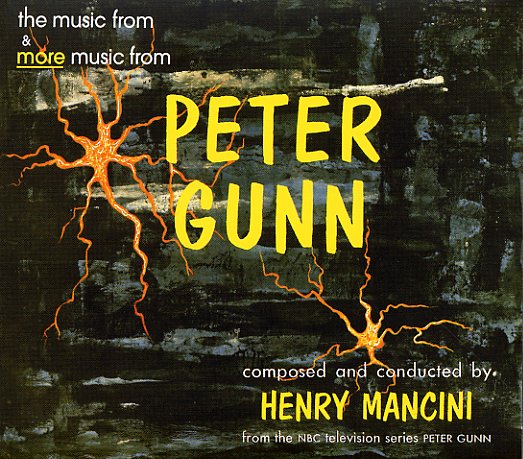 2 great Mancini soundtracks on one CD – Peter Gunn and the follow-up More Music From Peter Gunn! Both records really made Mancini's career – taking a lesser-known composer firmly into the limelight with a unique style of crime jazz that endured long after the short-lived detective show it was written to accompany! The real charm of the music lies in the arrangements and the players, though – as Mancini manages to craft the tunes with enough real jazz elements to give them a lot more of an edge than the usual batch of TV music. Nearly every tune's a classic, and the set features 24 titles that include "Peter Gunn", "Goofin At The Coffee House", "Blues For Mothers", "Sorta Blue", "Brothers Go To Mothers", "Dreamsville", "Blue Steel", "Odd Ball", and "The Little Man Theme".  © 1996-2022, Dusty Groove, Inc.
(Out of print.)

Charade
RCA, 1963. Used
CD...$7.99
One of the grooviest Henry Mancini soundtracks of the 60s – a wonderful blend of jazzy themes and action moments, and a record that's possibly better-remembered than the film for which it was recorded! The main "Charade" theme is a total gem – performed here in both a guitar-h ... CD

10
Warner/Real Gone, 1979. Used
CD...$24.99
Back in the day, we remember digging the movie 10 for the fact of Bo Derek's bareness – but these days, we're more likely to love it for this sweet little soundtrack from Henry Mancini! The score's a bit different than the sound of Hank in years past – and the high points are some ... CD

Once Upon A Time In The West
RCA, 1969. Used
CD...$4.99
One of Morricone's most famous scores – and certainly the one that got him recognized worldwide as a genius! The whole thing's pretty damn eerie – about as eerie as the movie, which is a real stunner – and it shifts from dark orchestral themes to sparer numbers that use guitar, ... CD

Chase
Columbia/Varese, Late 60s. Used
CD...$8.99
A lesser-known moment of genius from John Barry – quite different than his work for the James Bond films of the time! Barry's working here in a mix of more ambitious orchestral themes – dark, brooding, and moody – but also interspersed with some lighter jazzier numbers that are ... CD