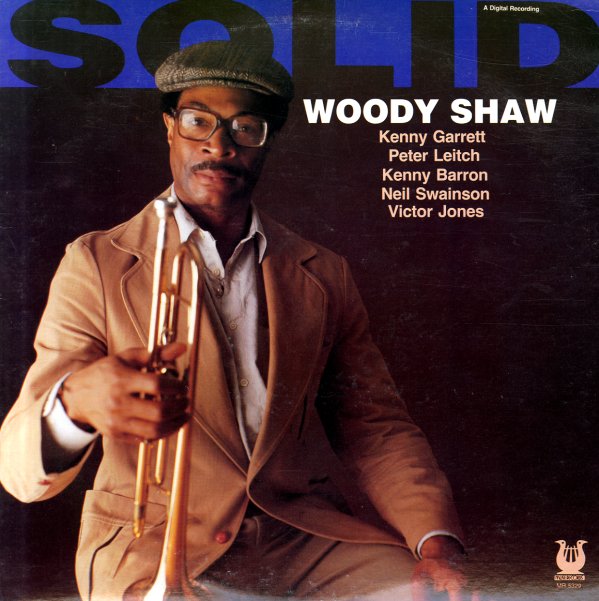 One of Woody's last albums – a back to basics set, recorded with a group that include Kenny Garret on alto sax, Kenny Barron on piano, and guest guitar work on one track by Peter Leitch. The approach is straight modal hardbop – in the spirit of Woody's first recordings for Muse – and although his genius seems to have faltered a bit, his work here is still incredibly solid, much more so than most other trumpeters of his generation, and still expressed in a preference for easily grooving longer tracks. Titles include "Speak Low", "Solid", "There Will Never Be Another You", "It Might As Well Be Spring", and "The Woody Woodpecker Song".  © 1996-2022, Dusty Groove, Inc.
(Out of print.)

Rosewood
CBS, 1978. Used
CD...$8.99
Woody Shaw's debut for Columbia Records – and easily one of the most soulful major label jazz sessions of the 70s! The album's a beautiful summation of all that Shaw had done in the years before – his soaring, searing lines that first came to play as a sidemen for others, then took new ... CD

Solid
Muse/Savoy, 1986. Used
CD...$11.99
One of Woody's last albums – a back to basics set, recorded with a group that include Kenny Garret on alto sax, Kenny Barron on piano, and guest guitar work on one track by Peter Leitch. The approach is straight modal hardbop – in the spirit of Woody's first recordings for Muse – ... CD

Brilliant Corners
Muse, 1989. Used
CD...$8.99
A great take on the music of Thelonious Monk – recorded with special sensitivity by reedman James Spaulding, who ensures that the sound goes way past the usual Monk-styled outing! Things start out in relatively familiar territory, but as the record progresses it really opens up – as ... CD

Impulse
Muse, 1992. Used
CD...$8.99
Buck Hill blows mean and lean here – working in a quartet with a solidly soulful finish, one that's perfect for his well-schooled sound on the tenor sax! The album's got a really non-nonsense feel – production from Houston Person that keeps the sound plenty clean, and very focused on ... CD

Collective
Muse, 1989. Used
CD...$14.99
Nice later Muse work from Cecil Brooks III – working here with a "collective" that includes Gary Thomas on tenor, Greg Osby on alto, Geri Allen on piano, and Lonnie Plaxico on bass. Tracks are all quite soulful, and have that strong in the pocket groove we've come to love in Brooks' ... CD

Gotstabe A Better Way (with bonus tracks)
Muse, 1988. Used
CD...$9.99
A well crafted set of tunes – both modern and soulful, in keeping with the rich talents of James Spaulding! The album sports a stupid title, but it's actually a thoughtful batch of tracks dedicated to African American achievement and expression – featuring Spaulding on alto sax and ... CD

Moonchild (Muse)
Muse, 1991. Used
CD...$9.99
A later set by soul jazz vibist Johnny Lytle – but a great one too, and a date that's done with a straight ahead mode that shows he's still swinging hard! The record's a bit less groove-oriented than some of Lytle's earlier efforts, but in ways that really focus on his longer-wind chops as a ... CD

Fountain
Muse, 1991. Used
CD...$6.99
A fountain of flowing work on vibes from the great Jay Hoggard – a player who seems to be a bit more forceful here than usual, although still often giving to his usually spacious style! The group's a quintet, with some great guitar work from Kenny Burrell – played in an open-handed way ... CD

Tune-Up!
Muse, 1972. Used
CD...$12.99
By this point in his career, Sonny hardly needed a tune up in his style – but the album's a great one from his post-Prestige years, and a real back-to-basics effort that recalls the genius of his work on Roost! The format is straight and simple – Stitt's tenor and alto fronting a ... CD

Revelation
Muse, 1989. Used
CD...$9.99
The music of Michael Carvin is always a revelation – a joyous, soulful outpouring of feeling that never fails to move us – and which always makes us wonder why more folks don't treasure gems like this that he made as a leader! Carvin's drum work is filled with energy from the get-go ... CD