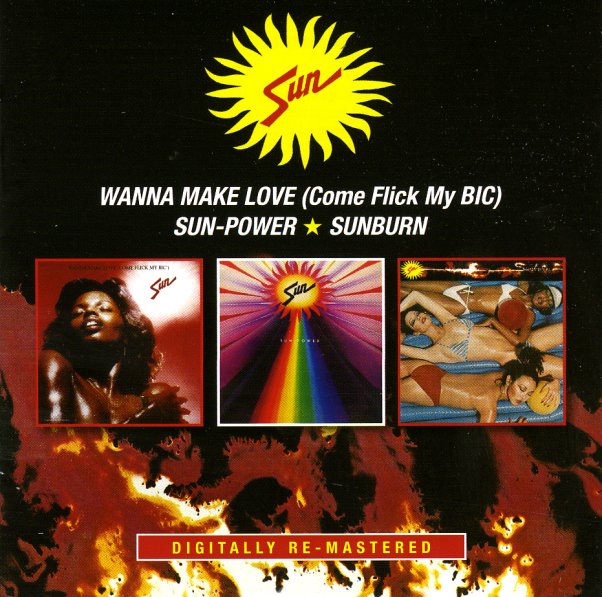 A trio of records from Sun – an excellent funk ensemble from the end of the 70s! First up is Wanna Make Love – one of the greatest records ever cut by Sun – a group whose records never made the charts as strongly as their contemporaries, but not for lack of quality! This set's a great batch of heavy ensemble funk with an edge that's not always heard on other Sun records – lots of razor-sharp guitars riffing away in saw-cut modes, striking hard at the grooves of the record, and chilling out nicely for the mellower cuts. The blend is wonderful – totally tight, and totally top-shelf all the way through – yet never in a commercial way at all. Titles include "Wanna Make Love", "My Woman", "Live On Dream On", "The Show Is Over", "Love Is Never Sure", and "They're Calling For Me". Sun Power is a solid smoker from Sun – the kind of tight funk set that made the group one of the greatest soul acts on Capitol Records during the late 70s! There's a wicked Ohio vibe going on throughout – everything focused together, and right on the money – even despite the large size of the ensemble – and touched with a slightly jazzy undercurrent that carries strong echoes of Earth Wind & Fire! Rhythms are nice and tight, with keyboards, guitar, and brassy horns over the top – and on the mellower cuts the vocals have a nicely compressed quality. Titles include "Conscience", "We're So Hot", "Organ Grinder", "She Lives Alone", "Time Is Passing", and "Light Me Up". Last up is Sunburn – a tightly crafted batch of dancefloor funk that reminds us of some of our favorite work from Fantasy Records at the time – especially some of the more righteous groups that blended equal parts jazz and soul! Sun's got a tightness here that's amazing – right up there with Earth Wind & Fire at their best, but not as commercial overall – and instead, always delivered with a nice sense of righteous energy! The set kicks off with the wicked "Sun Is Here", a guitar-driven groover with a very famous sample riff – and a sound that's somehow more stripped-down and jazz funk-driven than a lot of the group's other tunes. Other cuts are pretty great too, with lots of warm bubbly soulful moments – and titles include "Dance", "Long Drawn Out Thang", "I Had A Choice", "Sun Of A Gun", and "You're The One".  © 1996-2023, Dusty Groove, Inc.

Rock Me Tonight
Capitol/Universal (Japan), 1985. New Copy
CD...$12.99 14.99
Freddie Jackson was certainly one of the biggest new soul stars of the 80s – and this debut LP is still a treasure! Freddie's got a skill that transcends his age – with an approach that's decidedly 80s, but classic enough to last for years and years. The songs on the record are all ... CD

LJ Reynolds (1981)/Travelin
Capitol/Expansion (UK), 1981/1982. New Copy
CD...$14.99 19.99
A pair of classic early 80s soul albums from ex-Dramatics singer LJ Reynolds! The self-titled '81 set is killer material in a modern Detroit mode all the way through – with top-shelf production by Reynolds, Don Davis, and Ronnie McNeir/ Ronnie, who'd been lost to the industry for a few ... CD