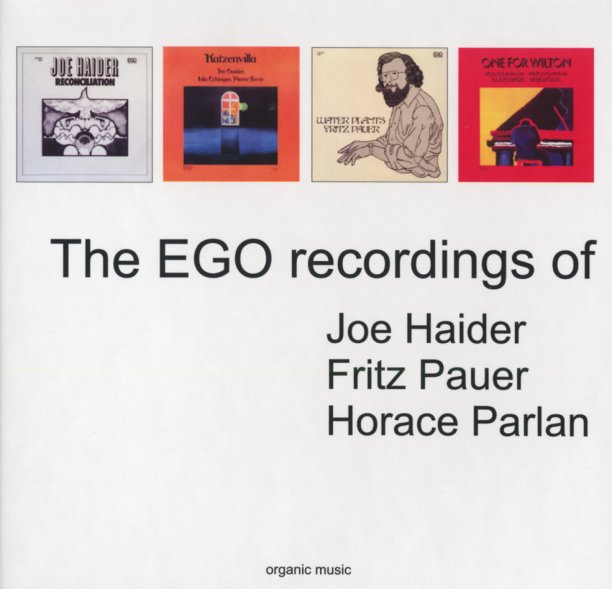 Four ultra-rare records – all brought together in one incredible CD set – the third collection to document the brilliant sounds of Germany's Ego Recordings label from the 70s! First up is the album Reconciliation from Joe Haider – one of the 70s gems on the mighty German Ego label – an incredible small company who seemed to put out nothing but excellent music! The set's led by pianist Joe Haider, and features a quintet with Andy Scherrer on tenor and soprano sax, Ack Van Rooyen on flugelhorn, Gunter Lenz on bass, and Todd Canedy on drums – all of them together welling up as way more than the sum of their parts, and cooking up an amazingly soulful set of tunes! There's bits of modal and American 70s spiritual soul jazz in the set – all played with a proud and buoyant style that unfolds majestically through the course of the album, never faltering in its vision or creativity. A under-acknowledged gem, with tracks that include "Mas De Serles", "Magdalena", "Reconciliation", "Crossover", and "Spanish Groove". Katzenvilla features the amazing trio of pianist Joe Haider, bassist Isla Eckinger, and drummer Pierre Favre – three very individual musicians who come together here as a group, but still retain a lot of their special energy! Haider's a lot more dynamic than usual – still with warm chords on the piano, but also some sharper edges – which seem pushed on by Favre's deft drum work, and his flowing sense of both melody and rhythm at the same moment. Eckinger's bass has these deep, soulful currents that we always love – and really grounds the whole thing in a wonderful way – on titles that include "Capricorn", "My Little Darling", "And Now", "Katzenvilla", and "Fate Of A Child" – all originals by Haider! Pianist Fritz Pauer steps out on Water Plants – a trio date that's got a lot more warmth and soul than some of the musician's previous work from the German scene – a beautiful little session that balances the deep bass work of Isla Eckinger and the subtle drums of Billy Brooks. There's a loose, lyrical vibe to the record that shows a side of Pauer we might not have expected – and Fritz wrote some wonderful tunes for the album, including "Water Plants", "Sagittarius", "Tribal Dance", "For La Rives", and "Autumn Evening". Last up is One For Wilton – one of the hippest later albums from pianist Horace Parlan – a set recorded with the saxophonist Wilton Gaynair, who'd contributed heavily to the UK scene in the late 50s/early 60s, then made great waves in Germany during the 70s! The set features Wilton on tenor and soprano sax, Parlan on piano, and great rhythms from Isla Eckinger on bass and Billie Brooks on drums – all coming together with a sense of warmth and imagination that's completely sublime – much richer than some of Gaynair's other performances from the 70s, and with a sense of flow and soul that makes the album one of Parlan's best. Titles include "Billie's Bossa", "One For Wilton", "Shade", "Firm Roots", and "Pananika". All albums come in tiny LP-style covers, and the box also features a bookle of notes!  © 1996-2022, Dusty Groove, Inc.

Putting It Together
Blue Note (Japan), 1968. New Copy
CD...$18.99 22.99
Proof that Elvin Jones wasn't just riding on the laurels of the Great One during his years with John Coltrane – as the album's a breakout date that has Jones firmly establishing his own voice in jazz! There's an explosive power here that makes us think that Elvin must have really just been ... CD