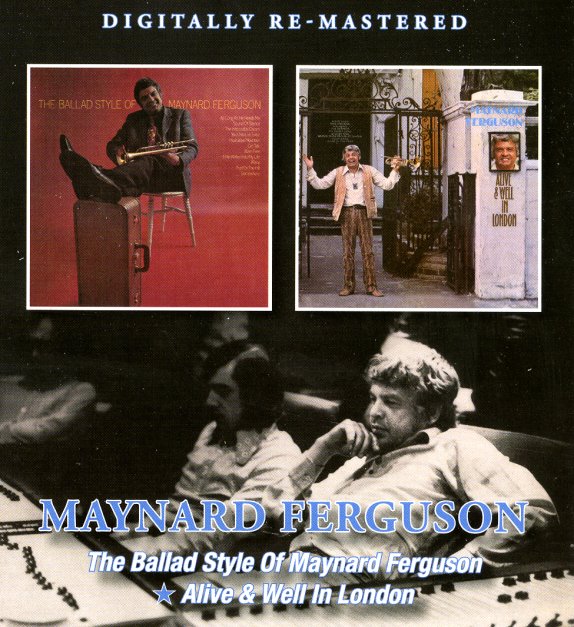 A pair of Columbia classics from trumpeter Maynard Ferguson – back to back on a single CD! First up is an album titled Ballad Style, but there's no sleepy ballads here – thanks to hip backings from British arranger Keith Mansfield – who also worked with Maynard Ferguson on some of his MF Horn sessions! As with other work of the time, Mansfield manages to keep things moving along nicely, even when mellow – and he mixes his own arrangements with orchestrations conducted by Alan Moorehouse that have some of the groovier touches of late 60s Brit Easy – even a very slight hint of a groove at the bottom of some tunes. The music is definitely in a ballad mode, but never as sleepy as you might think – and titles include "Girl Talk", "Born Free", "You Only Live Twice", "Sound Of Silence", "As Long As He Needs Me", and "The Impossible Dream". Alive & Well is equally groovy – funky big band material at its best – with hard-grooving arrangements from Brit talents who include John Cameron, Kenny Wheeler, and Keith Mansfield – all of whom mix together key elements of sound library funk with enough pure jazz to make Maynard sound great throughout. Tunes include some great groovy covers – "Move Over", "Aquarius", "My Sweet Lord", "Your Song", and "Living In The Past" – plus Mansfield's own "The Serpent".  © 1996-2022, Dusty Groove, Inc.

Sorcerer
Columbia/Legacy, 1967. New Copy
CD...$4.99 7.99 (LP...$69.99)
Another bold new direction for the legendary Miles Davis Quintet of the 60s – a set that has some of the angular styles of earlier albums, but also a bit more of the flowing grace to come in the electric years! A key illustration of this is the leadoff track "Prince Of Darkness" ... CD