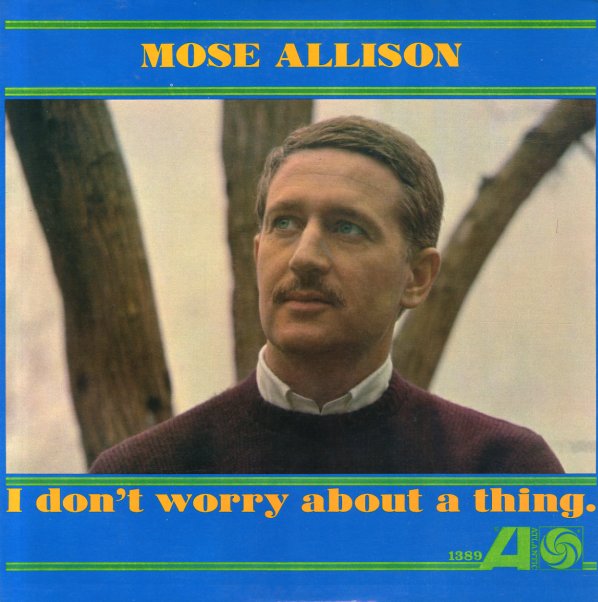 I Don't Worry About A Thing

Also available
Mose Allison — I Don't Worry About A Thing (gold vinyl pressing) ... LP 23.99
Early Atlantic Records work from the great Mose Allison – easily one of the most unique jazz artists of his time! Most started out as a pianist with a nicely bluesy vibe, but soon added in this excellent vocal approach that was maybe part New Orleans, part New York hipster – delivered here with a vibe that follows nicely from his earlier recordings for Columbia and Prestige Records! The sound is nice and stripped-down – none of the larger arrangements that Mose would soon use on Atlantic – and the set features accompaniment from Addison Farmer on bass and Osie Johnson on drums. Titles include the classic "Your Mind Is On Vacation" – plus "I Don't Worry About A Thing", "It Didn't Turn Out That Way", "Stand By", "Meet Me At No Special Place", and "The Song Is Ended".  © 1996-2022, Dusty Groove, Inc.
(75 Rockefeller pressing. Cover has partial split on top, light surface wear, cutout notch.)

Let's Love
Atlantic, 1974. Near Mint-
LP...$7.99 (CD...$6.99)
An incredibly lovely later album from Peggy Lee – her first album for Atlantic, and proof that she was still growing tremendously as an artist, well into the 70s! The record's title track was a tune written for Peggy by Paul McCartney, who also produced the number for the record – and ... LP, Vinyl record album

Mabel Mercer Sings Cole Porter
Atlantic, 1955. Very Good
LP...$2.99 4.99
A classic album of Cole Porter tunes – sung by Mabel Mercer with just a bit of tinkling piano in the background! The overall sound's a bit older than you might guess from the date of the record – a mode that takes most of the Porter tunes relatively straight, served up in Mercer's ... LP, Vinyl record album

Just A Little Lovin'
Atlantic, 1970. Very Good+
LP...$9.99
Bold, boozy work from Carmen McRae – a wonderfully mature album from that great time when her style was equal parts jazz and soul – put together here by arranger/producer Arif Mardin, a perfect choice for the record! There's a care to the overall presentation not heard in some of McRae' ... LP, Vinyl record album

Double Exposure
Atlantic, 1960. Near Mint-
LP...$14.99
One of Chris Connor's standout albums for Atlantic Records – and a session that actually makes us really appreciate the presence of Maynard Ferguson! The album's got a bit more punch than some of Chris' other records for the label, and is a nice shift in mood after a series of sad, dreamy, ... LP, Vinyl record album

Songs Of The Beatles
Atlantic, 1981. Near Mint-
LP...$3.99
Sarah Vaughan sings the Beatles – and does a pretty great job, too – thanks to backings from Marty Paich! LP, Vinyl record album

Love Songs
Atlantic, 1968. Very Good
LP...$1.99
A great return to form for vocalist Earl Coleman – a singer who'd recorded earlier in the bop years, but who makes a rare 60s appearance here on a soulful set for Atlantic Records! Coleman's got a rich voice that's somewhere between Johnny Hartman and Billy Eckstine – with a great ... LP, Vinyl record album