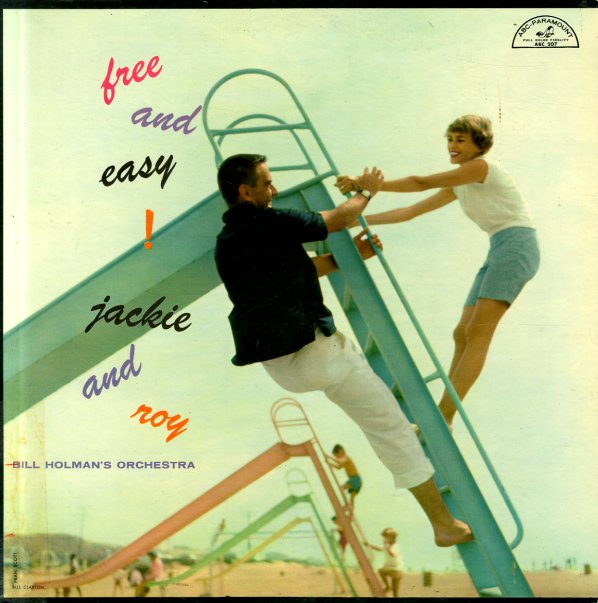 One of the grooviest records ever by the wonderful vocal team of Jackie & Roy – a sweetly swinging 50s session, with great LA jazz backings from the orchestra of Bill Holman! There's a breezy vibe to the whole thing that's years ahead of its time – not pop harmony vocals, but an approach that's strongly rooted in jazz, but also loosened up from the strict vocalese of the bop singers too. The cover's got Jackie & Roy playing on a slide at the sea – and that free and easy image certainly sums up the feel of the music – a lightly playful blend of jazz vocalese, ballads, and strong duet numbers, all sung with the usual Jackie & Roy charm. The set includes some great tunes, too – including "Pent Up House", "Free & Easy", "So It's Spring", and "Aren't You Glad You're You".  © 1996-2020, Dusty Groove, Inc.
(Mono black label pressing with deep groove.)

Stephen Sondheim Collection
Finesse, 1982. Near Mint-
LP...$3.99
A pretty great set from this lovely duo – a special live club performance in New York, based around the great songs of Stephen Sondheim! Titles include "Barcelona", "Love Is In The Air", "I Remember", "Johanna", "Everybody Says Don't", "M ... LP, Vinyl record album

Glory Of Love
ABC, 1956. Near Mint-
LP...$4.99
One of our favorite albums by the team of Jackie & Roy – a really special little set that features small combo backing, great tunes, and some of the best vocals of their early career! The album features Roy playing piano in a quartet with Barry Galbraith on guitar, Milt Hinton on bass, ... LP, Vinyl record album

When The Lights Go On Again
ABC, Late 60s. Near Mint-
LP...$11.99
A strange late effort from Kay Starr – but a nice one! At this point in her career, Kay was way past her early 50s hits – but she still had a voice that was instantly recognizable, and which always lent itself nicely to slower and dreamier pop-type tunes. She gets plenty of those on ... LP, Vinyl record album

Once Around The Clock
ABC, 1959. Near Mint-
LP...$11.99
A great 50s vocal session – for a number of reasons! One of the strongest is Patricia herself – a fresh-voice singer who's without hoke – backed by some moody arrangements from the Creed Taylor Orchestra. Even better is the selection of tunes – which includes a number of ... LP, Vinyl record album