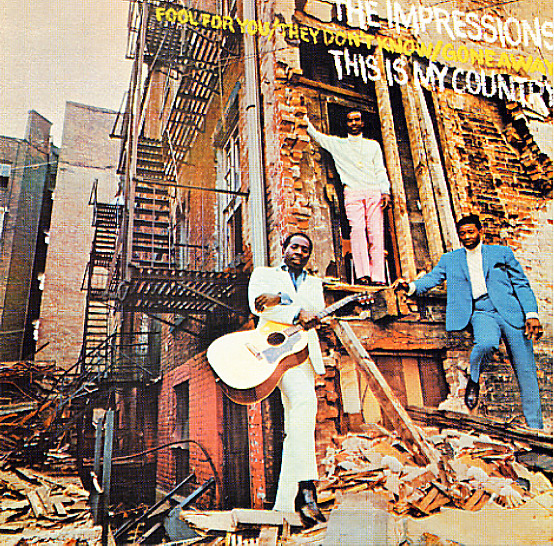 This Is My Country

The Impressions are wearing their politics much more on their sleeve at this point – what with a cover that shows them standing in the rubble of the ghetto, and a title that is both a bold proclamation of ownership, and a sad comment on the state of affairs. Curtis Mayfield's pen is in perfect form here, and the group hits that perfect mix of sweet soul and politics that make these late 60s efforts some of their (and Curtis') strongest work. Their harmonies far surpass the earlier years, which still kind of make us wish that Curtis hadn't gone solo, because we just love the sound of his sweet raspy voice next to the deeper style of Fred Cash. The set's filled with great cuts like "This Is My Country", "Loves Happening", "Fool For You", and "Stay Close To Me".  © 1996-2021, Dusty Groove, Inc.
(Original pressing with Bell Sound stamp. Cover has very tiny mark from old price sticker, barley noticable!)

People Get Ready
ABC, 1965. Good
LP...$9.99
One of the greatest albums ever from The Impressions – and a set that takes their work to a whole new level, by bringing in an even more righteous sound! The core elements of the group's 60s genius are all in place here – compositions from Curtis Mayfield, arrangements from Johnny Pate ... LP, Vinyl record album

Keep On Pushing
ABC, 1964. Fair
LP...$7.99
There's no need for The Impressions to push from behind – because with a record like this, they're very firmly in the driver's seat! The album's a treasure through and through – one of the greatest documents of 60s soul from the Chicago scene – filled with sublime original ... LP, Vinyl record album

Never Ending Impressions
ABC, 1964. Good
LP...$5.99
A major winner from The Impressions! Virtually all of their material for ABC was excellent – and this LP is no exception, as it's got loads of original Curtis Mayfield compositions, and plenty of great arrangements by Chicago soul legend Johnny Pate. The group is extremely soulful at this ... LP, Vinyl record album

Impressions Greatest Hits
ABC, 1965. Very Good
LP...$6.99
Far more than a regular greatest hits – this is a full-fledged album, and one that includes a number of cuts that were singles for the group, but which don't really show up on other albums. The set is all-original, all-Curtis Mayfield penned, and all Johnny Pate arranged material – ... LP, Vinyl record album

Superfly (non-gatefold pressing)
Curtom, 1972. Very Good+
LP...$29.99 (CD...$4.99, CD...$3.99)
Curtis Mayfield's lasting classic – and an album that the world will remember forever! Apart from being his hugely successful entry into the blacksploitation soundtrack field, this album's also a monster set of grooves that includes some of Curtis' funkiest work ever – a record that ... LP, Vinyl record album