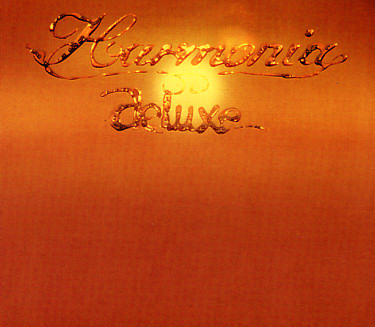 A brilliant little album from Harmonia – quite possibly their greatest record ever, and a set that's wonderfully balanced between progressive and electronic modes! There's a live drummer on the set – Mani Neumeier of Guru Guru – and although he still plays with a spare, circular mode that recalls the Harmonia rhythms of before, there's also a slight bit of propulsion here too – one that pushes the keyboards and guitars alongside nicely. There's also some spacey vocals at times, which when coupled with these other elements, gives the record a sound that's a bit like early Neu – although still a bit more electronic overall. A great bridge between two worlds of music in the German scene of the 70s – with tracks that include "Gollum", "Monza", "Notre Dame", "Deluxe", "Walky Talky", and "Kekse".  © 1996-2022, Dusty Groove, Inc.
(Digitally remastered.)