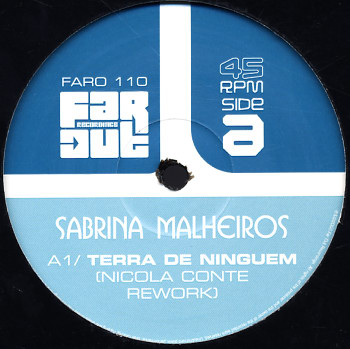 Nicola Conte, we love you – and if we ever needed a reason why, this single sure is proof! Sabrina's one of the better modern bossa divas around – really classic in approach, but with a great energy for the dancefloor – and here, she gets a Schema-styled taken courtesy of Conte – who kicks in a snare-heavy groove that really snaps the tune along wonderfully – jazzing up Sabrina's take of the famous "Terra De Ninguem", and almost making the whole thing come off like an Elis Regina classic from the 60s! A real bossa dancefloor gem – and one of our favorite singles on Far Out to date!  © 1996-2023, Dusty Groove, Inc.
(In a Far Out sleeve.)

Mellow Out & Acoustic EP 1
Jazzy Sport (Japan), 2006. Near Mint-
12-inch...$39.99
As the Cro-Magnon sound gets progressively more heavily textured and atmospheric on their successive and still stellar LPs, the trio scales it back a bit for the Mellow Out & Acoustic – a groovy batch of jazz funk covers and originals! The vibe is actually often electric, cut from cloth ... 12-inch, Vinyl record