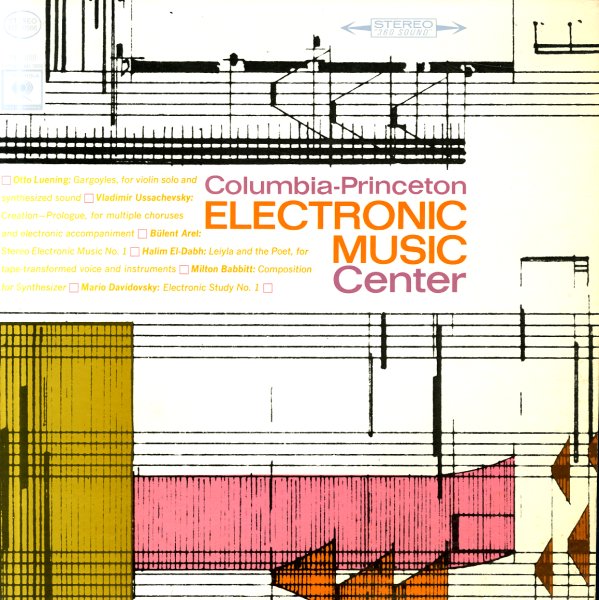 Great collection of early electronic music compositions – which are (in our humble opinion) still some of the best. Dark moody soundscapes by some of the early masters of the technology: Buloent Arel "Stereo Electronic Music No 1", Halim El-Dabh "Leiyla & The Poet", Vladimir Ussachevsky "Creation Prologue", Milton Babbitt "Composition For Synthesizer", Mario Davidovsky "Electronic Study No 1" and Otto Luening "Gargoyles".  © 1996-2021, Dusty Groove, Inc.
(Mono 2 eye Masterworks pressing. Cover has an ink stamp on each side, with a few library stickers on the back.)

Satyagraha (3LP Box Set)
Columbia, 1985. Near Mint- 3LP Box Set
LP...$59.99
Amazing work from Philip Glass – his second great opera, and a long-overdue follow-up to Einstein On The Beach – a set of music that's every bit as great as that groundbreaking work, but maybe even with stronger, fuller execution overall! The piece looks at the early political years of ... LP, Vinyl record album

Music For A Summer Evening (Makrokosmos III) – Gilbert Kalish/James Freeman/Raymond DesRoches/Richard Fitz
Nonesuch, 1975. Very Good+
LP...$6.99
This is a five-part piece for 2 amplified pianos and percussion. It is performed by the same people who premiered the work in 1974, a year previous to this recording. LP, Vinyl record album

Musica Eletronica
ES Mangione (Brazil), 1960s. Near Mint-
LP...$19.99
Some of the most important electro-acoustic music to come from the Brazilian scene in the 60s – recordings that are every bit as powerful as similar experiments from Europe at the time, particularly the revolutionary talents working in Paris! Jorge Antunes takes a big page from their book, ... LP, Vinyl record album

Variations IV – Volume II
Everest, 1965. Near Mint-
LP...$14.99
A very cool album that presents Cage at the height of his "chance" composition stage, and which features him and David Tudor playing a mixed bag of sounds on a sound system, recorded live at the Feigen-Palmer Gallery in LA. The work is the kind of stuff you always hear about with Cage, ... LP, Vinyl record album