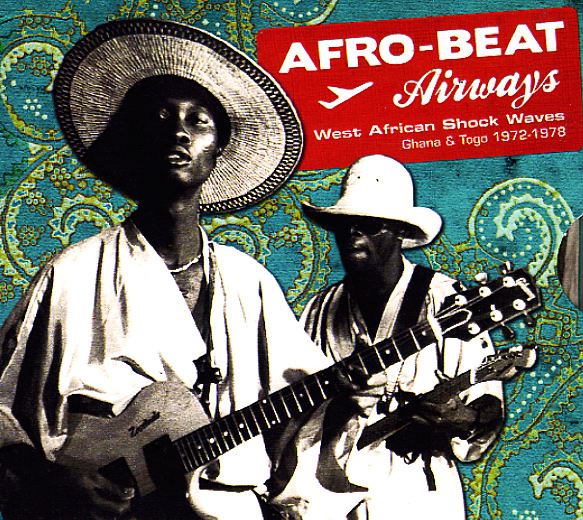 Raw, amazing grooves sailing the Afro Beat Airways – organ flavored Afro funk, soul & psychedelia from West African Ghana & Togo in the 70s – one of best compilations yet on the increasingly awe inspiring Analog Africa label! The African percussion is raw and danceable and funk steeped, and most of the numbers have a range of really cool organ sounds, and vocals that range from insistently melodic singing to to funky shouts. From there, the groove is more varied. There's strains of tried & true Afro funk & soul, larger group jazzy jams and more stripped down cosmic and psych influenced nuggets. Exhaustive research on the part of Analog Africa is distilled into a riveting, yet nicely diverse and pretty much perfect compilation with great sound, beautiful packaging and a wealth of notes. 14 tracks on the CD: "Dankasa" by Uppers International, "Ma Mserew Me" by Apoagya Show Band, "Come Along" by Ebo Taylor & The Pelicans, 'Afe Ato Yen Bio" by De Frank Professionals, "Awula Bo Fee Ene" by Orchestre Abass, "Ne Noya" by Cos-Ber-Zam and more.  © 1996-2022, Dusty Groove, Inc.
(Out of print. Includes original book and slipcase.)

Take One
Analog Africa (Germany), Mid 70s. Used
CD...$13.99 16.99 (LP...$29.99)
Early work Zimbabwe legends Hallelujah Chicken Run Band – a group that was an early showcase for the vocal talents of the equally legendary Thomas Mapfumo! The set's not just a Mapfumo showcase, though – as the sound here resonates strongly from the whole group – nice harmonies ... CD