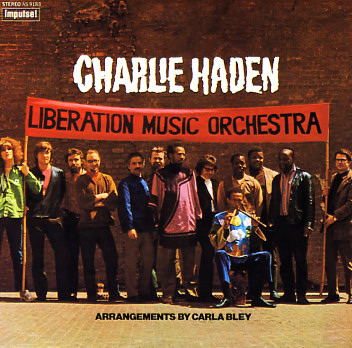 One of the most beautiful albums that Charlie Haden ever recorded – and if he only ever appeared on one record in his life, we'd still love him tremendously for this one! The album has a feel that's very much in keeping with both the "liberation" and "orchestra" in the title – "liberation", in that the music is filled with inspiration from South American sources, and has a strongly political feel at times; and "orchestra" because the group here is somewhat large, and filled with a tremendous array of expressive players – including Gato Barbieri on tenor, Dewey Redman on alto and tenor, Don Cherry on cornet and flutes, Michael Mantler on trumpet, Roswell Rudd on trombone, Robert Northern on French horn, Paul Motian and Andrew Cyrille on percussion, Carla Bley on piano, and Perry Robinson on clarinet. Haden leads these disparate talents through a set of tremendously focused music – filled with as many ideas as it is with a sense of humanity and soul – all to brilliantly point the way forward for the new sound of Impulse Records in the years after Coltrane's death! Titles include the classic "Song For Che", plus Ornette's "War Orphans", Carla Bley's "The Interlude", and "Song Of The United Front", by Hans Eisler, and with words by Brecht!  © 1996-2021, Dusty Groove, Inc.
(Black label stereo/quad ABC/Impulse pressing.)